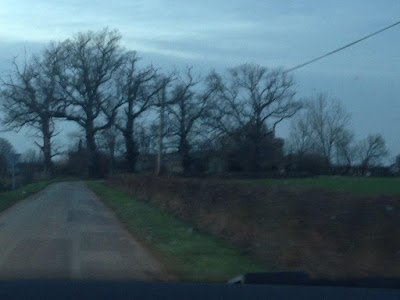 Seen from the road in passing 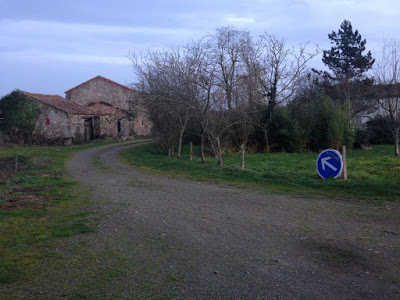 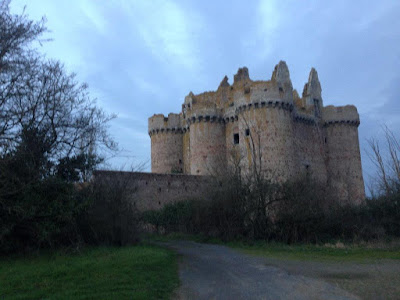 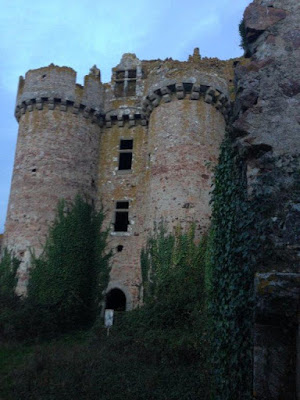 Ruins of the château de l'Ebaupinay 15the century of the Vendel family,

burnt during the revolution

and inoccupied since that time 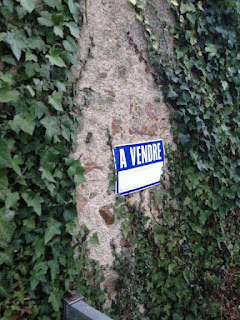 It's that moment when you forget the rest, when nothing else seems to matter but a
certain intensity of feeling. You can't count these by dozens in your life but the very strength of the emotion makes these rare experiences memorable. I'm sure what triggers it is very personal and maybe related to a receptive state of mind.

Have you had at least one of these? With nature, art, music?
I remember having it happen as a young girl riding over a bridge at sunset. Unfortunately, that sounds trite and very picture postcard, but I still remember the wonder of the sun's low-slung light glowing on the metal structure and the way our car was becoming part of the blaze.
I didn't say a word, not a whisper,
there in the back seat.

It happened again at an exhibit I was enjoying but where I had in no way expected
to stumble on something to make me feel like time stood still.

But there it was, ready to spring from a gown I didn't really like -

the delicacy of the flowers woven into the glowing orange satin made my heart sing.
Obviously, no picture could reproduce the sensation.

La comtesse de Gruffulhe or what to wear to an apotheosis

This grande dame has appeared in these pages once before, she who inspired Proust for the character of the duchesse de Guermantes in Remembrance of Things Past. Despite the novelist's immortalization, she hadn't been a personality much in view. But these days my post is being clicked on wildly all because of a certain exhibit about her very wonderous wardrobe.

I had written about the Comtesse Greffulhe with for starting point a fait divers concerning
her home. Her monumental apartment as seen during WW II, was a phantom ship during war days. It was so difficult to heat that she had René Prou design a small, utilitarian cabin that was plunked smack dab in the middle of her fine salon with its moldings and towering ceilings
just so she could keep warm.

And here she is,
staring out of a photograph that was unknown to me before from the exhibit poster -bien emmitouflée- all wrapped up in a coquettish way that has the immense charm of the unexpected from a woman of her rank straight out of the Belle Epoque.
Clearly, she the comtesse de Gruffulhe never liked to be cold!


A sense of mise en scene.
If I had read about her before, studied her a bit, I hadn't realized just how important her own image was to her before seeing the revealing exhibit at the Palais Gallièra,  La mode retrouvée: les robes trésors de la comtesse de Greffulhe -


nor how calculated it all was.

Her extensive use of photography can only be compared to that of the Comtesse de Castiglione, that other image-controling comtessse who was her elder by 23 years. If the fascinating comtesse of Castiglione was melodramatic, la Greffulhe played more in the register of subtlety and refinement. And as a reigning queen of the social scene, she staged her performances with a perfectionist's sense of detail in her costumes. She would arrive late, limit the time of her appearances in breath-taking toilettes that were out-of-time and place, then disappear. What is precious is rare! As for the photographs, they were mostly for herself - and posterity. She framed them for her home, but gave away very few.

Her wardrobe was the cornerstone of her persona. All the trips to all the best couture houses of the time were more to assure, she said, of what she would not wear, Worth often worked with her  to create the gowns she felt suited her best, and peu importe if no one else was wearing a princess bodice those days.  One dress by Worth was cut from a giant-scale Renaissance patterned silk velvet; he also devised a cape with the gift from the Czar Nicolas II of a Bokhara brocade. The Comtesse was eccentric, strange but always distinguished. 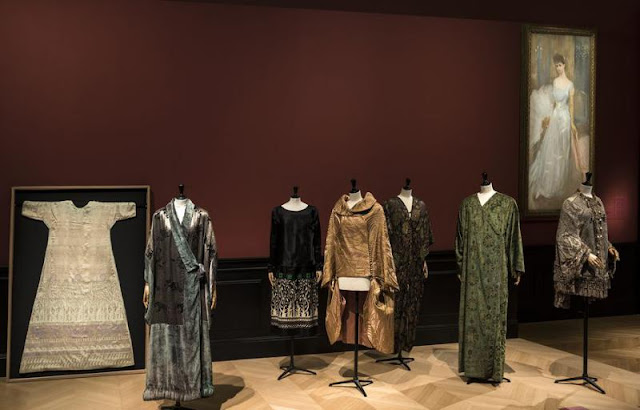 The exhibit also demonstrates a certain penchant for Fortuny and Babani.

Robert de Montesquiou, also proustified as Charlus, was a true kindred spirit. This uncle of very nearly her same age, encouraged the young Elisabeth in her obsession with finery and in carving out her own style.  As Alexandra Bosc states in the exhibit catalogue, it is probable that, like dandies of the day, Countess Greffulhe attached metaphysical value to the elegance of dress, seeing in this "cult of self" the manifestation of her inner being,

Baudelaire said in Le Peintre et la vie moderne that she had
"a burning need to be an original."

The label of his fur-trimmed gown of gold brocade reads Worth, but it was actually designed by the young Paul Poiret when he was employed by that couture house. I recall from reading Poiret's memoirs that he, for one, did not appreciate this client. The Comtesse wore this opulent robe Byzantine to her daughter's wedding at La Madeleine
to which she contrived to arrive early,
that is, before the bride was present.
The papers of the day cooed that it was hard to judge which young lady was to be married and described the gold gown in minute detail hardly mentioning the wedding dress.

It must have been unbearably hot to be the daughter of such an original at times.

Marcel Proust, however, looked on the Comtesse, imperfect and narcissistic in her search for perfection - with awe and tolerance. Had she found a way to deal with the deception that came so quickly after her marriage and her husband's outlandish philandering? To Henry Greffulhe, she was a trophy, but the hunt was what mattered the most. Mr Proust wrote her a letter from which there is just this thought provoking snippet in the exhibit catalogue,

et je sais tout ce qu'il peut y avoir de héroïsme dans la  beauté
and I know all there can be of heroism in beauty.

So she always dressed with care throughout her life,


Reports say that the Comtesse stayed supple and svelte through yoga and healthful lifestyle, always seeking to improve herself physically, mentally and spiritually. All this is not to say that Elisabeth Greffulhe thought only of bettering herself. She was utterly devoted to music and was a strong patron of the arts. She supported scientific advancement and charitable causes of her time. She also founded a Spiritualist institute that still active today.

The scenography takes a daring turn and goes so far as to suggest the Comtesse Greffulhe's death.  Her earthly body is replaced by a gown laid upon a bier; it is so fresh, so tender - dare I say, young? -  she has become a dress of chiffon and taffeta decorated with orchids.

I wonder if she also wore Worth's scent, Je reviens?

...a grace no less disturbing than an artistic emotion. Every thing around her sweetens in a delicious spirit that can be summed up in the folds of her dress.
Portrait de Madame
Marcel Proust