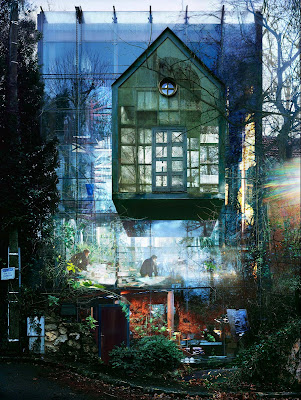 Toulaho
If you look at the architect Jacques-Emile Lecaron's website you'll find factual images of the houses he designed over a period of time in the the rue des Fougères, Clamart as well as some of his other notable buildings. Photographer, Jean-Jacques Salvador, has taken these already imaginative constuctions and gone a step further giving them another dimension. An interesting example of one art beckoning to another.
(Click on the photos, they are best viewed enlarged.)
Toulaho is Lecaron's own residence/agency. A contracted form of  "tout là-haut", it's name simply means that it is the house at the top of the street.  If its glass block facade makes a display case for the goings-on inside, there is also a classicly contoured house of green such as a child might draw - square + triangle - that has been encrusted for the dwelling's more intimate spaces. It's a little cabin in the woods that appears to float in the reflection of the trees, or then, some see it as a cuckoo clock fixed to a wall.
Lecaron explains,
"Je l’ai rêvée maison libre, maison qui vole, maison dans les arbres.”
I dreamed of it as a house that was free, a house that flies, a house in the trees. 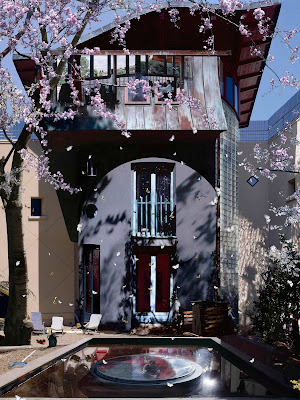 one of the 7 houses in Clamart
Reflections, shadows, and views through the windows show inhabitants, intimate memories and passing events. Salvador's photos are rarely just interesting angles and light. He reworks the scene, associating it with the  pieces needed to complete the puzzle. There's somtimes a breath of wind, but what blows there?
Take a closer look. 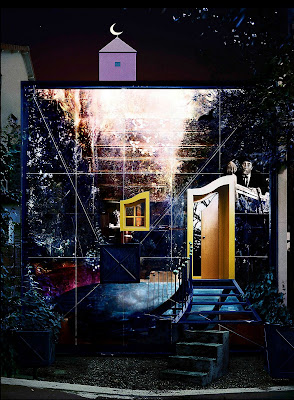 Derrière le Miroir
Where does the the photographer's fantasy take up and the architects's leave off ?
Jacques-Emile Lecaron conceived each architectural design in keeping with the personalities of their owners. Salvador then set up the occupants in the houses according to each individual story.  Both architect and photographer are inspired by the universe of fairy tales as a souce of wonder, mystery, sometimes of fear. 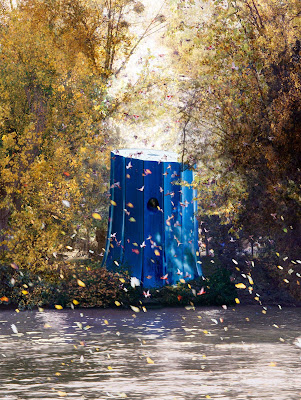 Tombeau de l'oeil oiseau
This truncated column, also designed by Lecaron,  is a control site for polution levels of the river Seine
located on the Ile Saint-Germain. Salvador's photo consecrates the monument.
Posted by gésbi at 9:26 PM