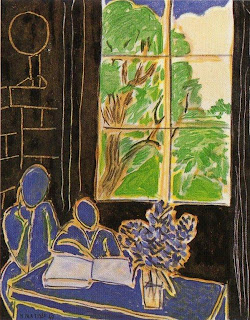 Matisse
The Inhabited Silence of Houses
Every once and again when I'm alone at home and all is quiet, I slip off into a sort of
pulsating atmosphere, where the Things around me beg for attention in a different way.

It's a bit like Disney's Beauty and the Beast,
without the singing and dancing and without the shiny faces. 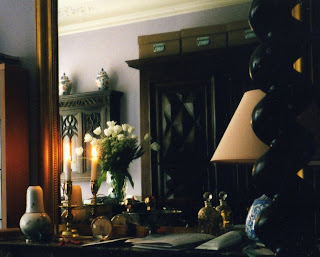 The furniture seems to motion to me with its extreme stillness. It moans and whispers. Floors creak, armoires adjust themselves with little pops, a drawer opens with a baritone grate. There's a humming in the air.
My cleaning lady tells me that she says "Bonjour, Maison!" when no one is in. So maybe I'm not alone in feeling a presence --- or maybe crackpots have a way of  finding one another. (A different cleaning lady identified more with another fairy tale. She saw herself as Snow White,  a beneficent presence who worked her magic by cleaning and putting everything right in the house. A lovely image. Unfortunately, her zeal was such that she scrubbed the paint right off the doors with very abrasive lessive St. Marc.)
Don't get me wrong, I don't talk to my furniture, I listen to it.  I do think we can communue with it in  moments of silence for our mutual benefit. 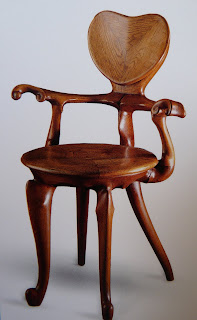 Gaudi
Calvet chair
Furnishings don't have to have a particular shape to make their presence felt at quiet moments, but some do exaggerate the point with their design, vying for attention among the more common lot.
How would you feel about sharing your home with this chair? You couldn't be lonely. You can tell me that you don't like Gaudi, but really, how could you dislike this little guy? Why, he's just stretching out his arms for affection!
Gaudi said, "Those who look for the laws of Nature as a support for their new works collaborate with the creator."  Could that be the secret? 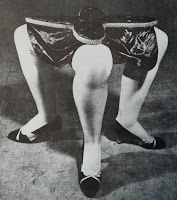 There are furnishings that incorporate the gimmicks of human form as with this Ultra-meuble by Kurt Seligmann or the chair in this Castaing bathroom.
I don't think they have as much personality as pieces whose animate quality is more abstract -- though they are a kick !
*
Then some furniture is scary at night. My son was afraid of an enormous Ile-de-France armoire that loomed in his bedroom when he was a toddler. It may not have helped that we referred to it as le monstre because of its size, but I don't think we used that term in front of him. I used to have moments of fright when alone in the house for an hour or two as a child. I was sure the antiques my parents collected released their spirits when my parents closed the door. 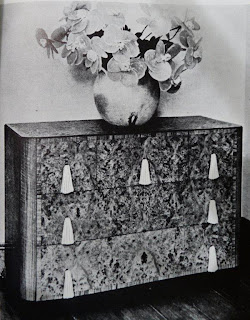 R.W. Symonds and R. Luytens
It may just be me, but some furniture has more expressiveness than others suggesting a face, a pose, a movement. Does anyone else see a be-whiskered face here? I'm sure this chest of drawers contains many unspoken secrets. These smooth rectilinear surfaces prove that a living quality doesn't have to come out of organically inspired forms... 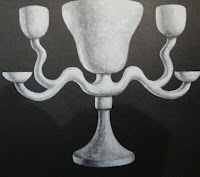 plaster lamp
Giacometti for Jean Michel Frank
but it often does.
Writhing forms and idiosyncrasies  aside, any furniture can speak to us. The most important thing is probably the vibration of one thing set off by another.
And quiet.
Shhhhh...
Posted by gésbi at 1:09 PM