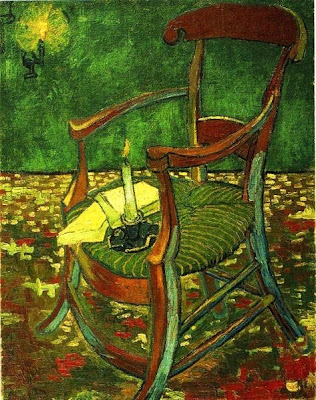 Vincent Van Gogh Fauteuil de Gauguin Amsterdam
When I was at the Musée Estrine in St Rémy de Provence, one of my favorite themes and hobbyhorse of late, came trotting back with the presentation of these two familiar subjects painted by Vincent van Gogh. The chairs were described as a diptych calling to mind and symbolizing the people who used them and so demonstrate quite nicely the overflow of the animate to the inanimate that we feel at times. 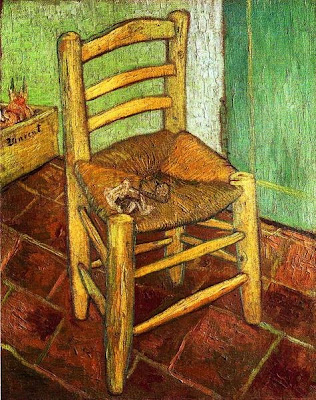 Vincent's own chair,  British Museum London
Vincent van Gogh, you may know, spent several years in St Rémy, some of them 1889-90 in the sanitarium of  St Paul de Mausole. The museum, which calls itself a 'center of interpretation' for the works of Van Gogh, explains that the artist must have been aware of the popular metaphor which has it that an empty chair symbolizes its owner. 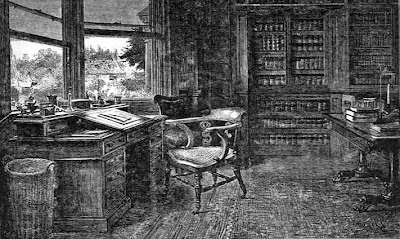 The Empty Chair by Sir Samuel Fildes
It's not surprising that Vincent would have used the chairs in this way to represent himself and his friend Gauguin. Searching further, I  found  it interesting that Van Gogh was in posession of a copy of this Fildes' engraving which represents Charles Dickens. Fildes was busy working on illustrations for The Mystery of Edwin Drood, when Dickens died suddenly. Struck by aura of his study when visiting  the author's bereft family, he recorded it as a watercolor, often reproduced through engraving as here. 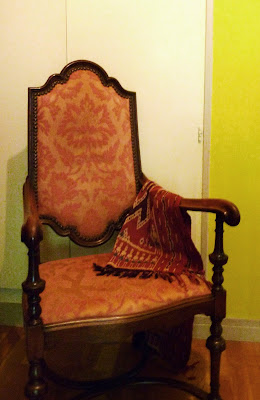