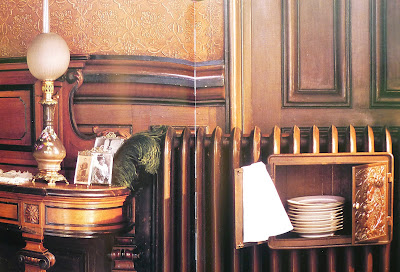 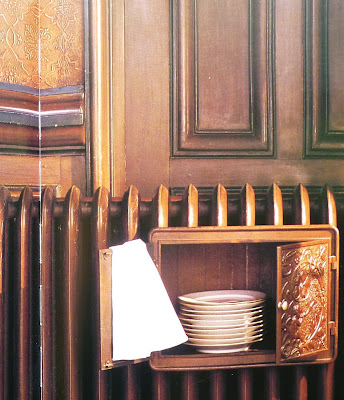 The Broken Towers of Chateau Brissac

There was some grumbling when we arrived there. We had missed the last guided tour before lunch time closure and would have to wait until the chateau reopened. We were told we could visit the grounds and have a snack while we waited. No 'proper meal.'  It  wasn't worth it to leave, so we would have to wait. Suddenly the architecture's somewhat clumsy appearance was magnified. Our timing frustrations and growling stomachs made a monster loom before us. 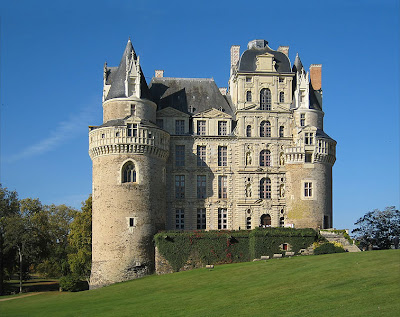 photo: wikipedia
What are those portly medieval  towers doing weighing down that Renaissance structure?
I have to show a Wikipedia photo to give the full effect. My own weren't taken straight-on and as often with 3/4 views, are all more flattering.
*
I do have to say, I have a wonderful husband  -- yes, he's just about perfect ----------
except when he hasn't eaten en temps et en heure.
It is in those moments that the glass is clearly half empty.
He did accept to wait it out until the next visit, but not quietly.
What could I say? The facade was imbalanced and squeezed uncomfortably beween its towers like a girdled giant;  I still wanted to get inside.


The Chateau park was was pleasant, however, bathed in beautiful Loire Valley light. We flew by the stables, then had most fun going through the dimly lit under belly of the property in long, damp subterranean passages. The 237 meter underground canal was created in the 19th century to avoid the flooding dangers from the river Aubance.


Somehow, we didn't really approach the front of the building itself until we had finished some patisseries and café, then finally, the guide rang the bell for us to assemble for our tour.


It was then we saw that it wasn't a continuous structure, nor a chateau with successive building stages such as the 15th century wing and the 16th century facade. We're used to that. No, up close we realized that the Renaissance building was cradled by the two very resistant medieval towers that someone along the way had refused to demolish. Towers are the very symbol of a chateau fort and these were not to be relinquished. Or so one supposes. They were kept surely as a reminder of the ancient fiefdom, indicating the venerable nobility of the Cossé family, Dukes of Brissac.


The guide, excellent and entertaining, did not expound on the tower subject, but spoke of the main construction periods. The original château-fort was built in the 11th century, was enlarged in the 16th by René de Cossé. The edifice has belonged to the Cossé-Brissac family since 1502. Badly dammaged during the wars of religion, it's reconstruction was undertaken in the beginning of the 17th century by Charles de Cossé. His intention was to build a perfectly symmetrical façade with a higher, larger central section and in time - or so it was explained - to tear down the two medieval towers. This work was interupted when Charles de Cossé died in 1621 and never was taken up again. We see the chateau today as it was left. Why he would have built with the hinderance of the two standing towers is a real mystery to me. I'd like to think that one day some juicy tale will be unearthed about it.


Take note: Chateau de Brissac is to this day a privately owned chateau where live the 13th Duke of Brissac and his family. With seven stories, it is known as the tallest chateau in France.  It is interesting for its continuous family history and connections with Louis XIII and Marie de Medicis, beautiful for its interiors and painted ceilings, and endearing for its wonderfully wacky towers. Because, what was considered flagrantly flawed just a few short hours before, had since our visit taken on another aspect. Like a broken nose in a classical face, Brissac's towers make it distinctive -- better than beautiful.


gallery of the uppermost floor
View from the corner window

Such charisma.
I wasn't the only one to leave convinced.

more on Chateau Brissac
Posted by gésbi at 4:33 PM 15 comments: 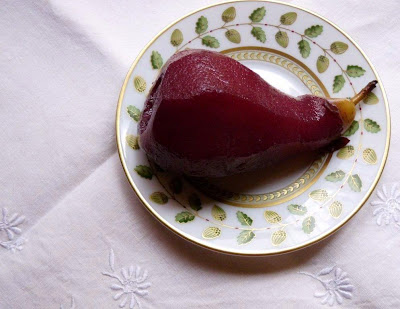 Poire au vin
My husband's answer to my craving for cinnamon and spices came at dessert on Sunday.
Posted by gésbi at 1:37 PM 5 comments: 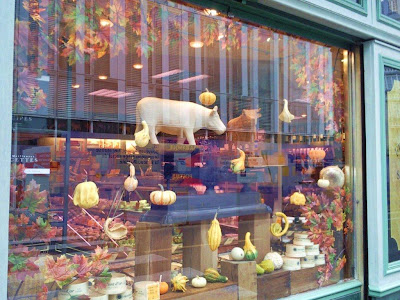 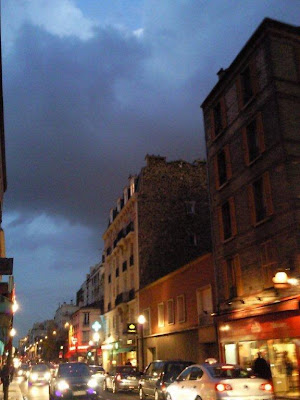 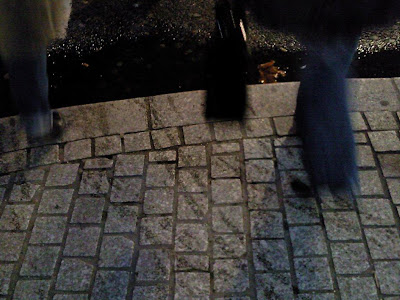 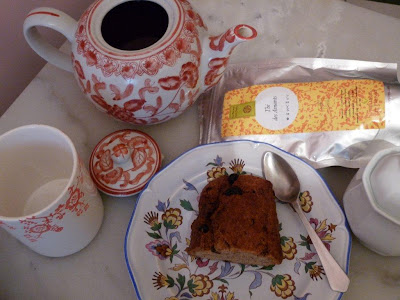 Low sky days and the comfort of a croquet à la cannelle with tea. I used to hear people speak with incomprehension about how Americans put cinnamon in EVERYTHING, but I've been seeing it around more often. Even cinnamon and spice tea is considered more palatable here if it is called Thé des amants, lover's tea....
Posted by gésbi at 9:46 PM 5 comments: 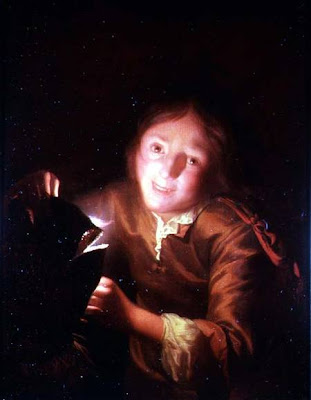 A Young Boy Holding a Candle Behind a Halloween Mask
image: repro-tableaux

The mysterious chiaroscuro effects in the work of 17th century Dutch artist Schalcken so seized writer Le Fanu's 19th century Irish imagination, that he worked the painter into two of his Gothic tales. From a passing mention in Green Tea to an entire story as a romanced character in The Strange Event in the Life of Schalken the Painter, the artist surely played a part in situations he had not foreseen through the bravura of his paintings.


'There are some pictures,' said I to my friend, 'which impress one, I know not how, with a conviction that they represent not the mere shapes and combinations which have floated through the imagination of the artist, but scenes, faces, and situations which have actually existed. When I look upon that picture, something assures me that I behold the representation of a reality.' 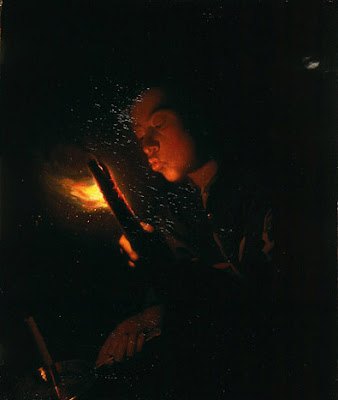 I was very touched by the Schalcken painting of Ceres looking for Proserpina of my last post, stumbled across in museum in Bourges. It was just the right moment to come upon it, when the days had begun to shorten and fade into a grey mist and so, I looked for more. Now that I know that Schalcken made a specialty of flame lit pictures, indeed, painted scene after scene of illuminations contained in the darkest of surroundings, I'm once again contemplating of how diffferent we would all be without our wonderful, but sometimes glaring, electrified world. Just one wavering candle seems to reveal the generosity of darkness better than anything else. 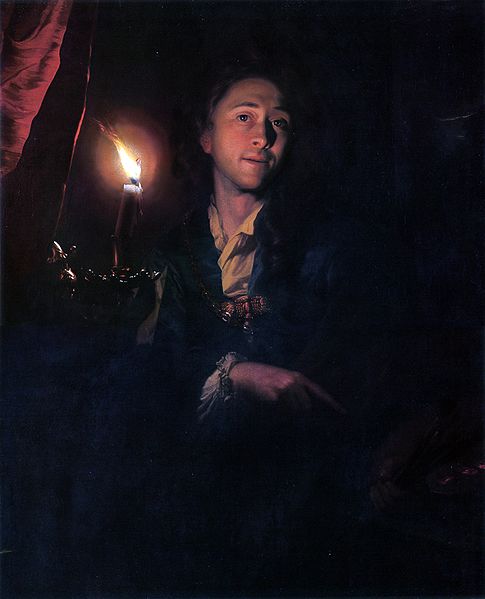 Here he is, quite the devil.  Part of the Leiden Fijnschilder's, or fine painter's, movement, Schalcken was a genre painter  who worked in an exquisite and highly polished manner. His master was Gerrit Dou, himself a student of Rembrandt. Reputed to be rude and uncouth with just the right nasty temper to set off his ill-mannered ways, it was no wonder the Dutch painter had problems getting along in society.  He didn't really fit into England where he lived from 1692–1697 and where he painted William III. Most known as a virtuoso of the candle lit painting and all the fuliginous obscurity which that implies, Le Fanu imagines him like this in his story:

"There are few forms upon which the mantle of mystery and romance could seem to hang more ungracefully than upon that of the uncouth and clownish Schalken--the Dutch boor--the rude and dogged, but most cunning worker in oils, whose pieces delight the initiated of the present day almost as much as his manners disgusted the refined of his own; and yet this man, so rude, so dogged, so slovenly, I had almost said so savage, in mien and manner, during his after successes, had been selected by the capricious goddess, in his early life, to figure as the hero of a romance by no means devoid of interest or of mystery."

That romance was writer LeFanu's fantasy, enflamed most likely by the view of not one particular painting, but several--and of his own imaginings. 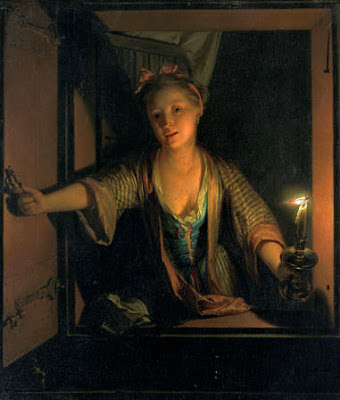 "I had often been struck, while visiting Vandael, by a remarkable picture, in which, though no connoisseur myself, I could not fail to discern some very strong peculiarities, particularly in the distribution of light and shade, as also a certain oddity in the design itself, which interested my curiosity." 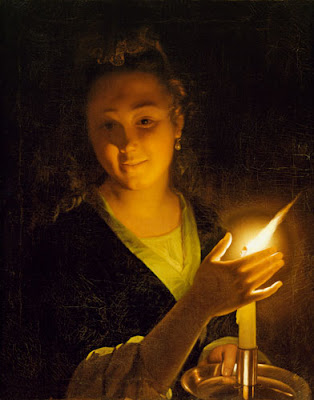 Maiden with a Candle image: Repro-tableaux

"In its hand the figure bears a lamp, by whose light alone the form and face are illuminated; the features are marked by an arch smile, such as pretty women wear when engaged in successfully practising some roguish trick..." 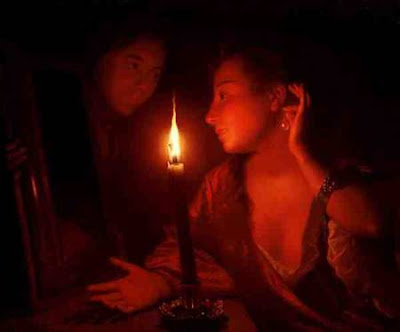 Lady admiring an earring by the light of a candle  image: Repro-tableaux

"Your fancy has not deceived you, my good friend, for that picture is the record, and I believe a faithful one, of a remarkable and mysterious occurrence."

Sheridan Le Fanu's color sense and close interplay with the painter's art are demonstrated when at the end of his fiction he states that by limiting his literary palette he has chosen a starker focus.
"This tale is traditionary, and the reader will easily perceive, by our studiously omitting to heighten many points of the narrative, when a little additional colouring might have added effect to the recital, that we have desired to lay before him, not a figment of the brain, but a curious tradition connected with, and belonging to, the biography of a famous artist."

One artist shows just as much virtuosity as the other.
***


for the full tale: The Strange Event in the Life of Schalken the Painter

and a BBC production: Schalken the Painter