Métro advertisement for the exhibit Rêves de monuments at the Conciergerie.
The Middle Ages in illuminated manuscripts and legends,
in painting literature and film, comics, toys, and video games.
Gothic structures have long inspired and inspire still. 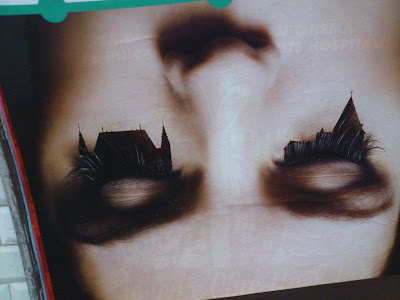 
They are on, aren't they?
Janvier  - le mois du blanc / January white sales
Magritte said his paintings were of
des rêves qui n'ont pas pour but de vous faire dormir mais de vous réveiller.
dreams designed not to put you to sleep but rather to awaken you.
Posted by gésbi at 4:19 PM No comments:

Did you know that dreams about new rooms in the house are considered to be among some of the most frequent to occupy our nights? That came as a surprise to me though I'm familiar with the idea of the house representing the self - attics for the intellect and basements for the unconscious. I also went through a phase with house dreams that often concerned stairways and passages, but discovering unknown new rooms...? That seems more like a day dream!


Unknown rooms = unknown resources, unknown contentions/threats.
If I could discover a new room in my house
(which is not a house but an apartment  - condo doesn't sound right - so I can't really add on at will),

1) a jardin d'hiver, veranda, a sun room, a conservatory. Yes, the word counts. Something like this one  up on stilts and designed by Eiffel before city planners became so difficult about add-ons.


This is not the way I would furnish it, but the space is delightful.

2) the true library that haunts me. Now I do realize that this is not the most practical set up and my back would certainly not like the chair, but here in the land of Morpheus, all is possible.

3) or yet again, a fumoir. This sensuous painting, filled with rich surfaces yet not too heavy, has always drawn me in. I was surprised when I saw the actual painting recently to discover how small it was. Still, it's big enough to contain a dream. The notion of a smoking room is old fashioned, quaint, but it gives a pretext for full-blown oriental decor and rich colors, opulent fabrics. The talent of the painter and the polished parquet here assure that the scene has nothing of a musty, static illustration from the annals of decoration. Smoking isn't my fancy, pipe dreams aside, but the tipple from my tumbler would be greatly enhanced in this atmosphere.

For more information on the veranda designed by Eiffel look here

Once again the Manufacture Prelle offers an enlightening look into its archives with a thematic exhibition.  Twice a year, the venerable Lyon silk weaver opens its Paris showroom at the place des Victoires, making marvels of textile culture come to life by placing them in their historic and aesthetic context for an appreciative audience.

for the full article please follow to St Tyl
Posted by gésbi at 4:51 PM 7 comments:

Once again the Manufacture Prelle showroom offers an enlightening look into its archives with a thematic exhibition.  Twice a year, the venerable Lyon silk weaver opens its Paris showroom at the place des Victoires, making marvels of textile culture come to life by placing them in their historic and aesthetic context for an appreciative audience.
The atmosphere is hushed, heels click on the parquet that gives an occasional creak. This rarefied world of shimmering, elegant fabric is for a time inhabited by dragons, phoenixes, butterflies and cranes who roam the material's silken threads.These very creatures first came over with Japan's trade openings to the western world in the 1850s, then multiplied and were fertile in the imaginations of textile designers until the 1930s. On view are a sampling of original Japanese fabrics as well as the Prelle fabrics they inspired during the period. We might say that the woven archival documents here establish the paternity of a long line of descendants at Prelle. And what's more, the Japonisme of the mid-century was almost a second genesis for the world of arts in the West.
The current showing  juxtaposes richly colored silk fabrics with Baccarat crystal and silver from Christofle in order to better communicate the rage for Japanese style in the decorative arts of the epoch.  Imposing period furniture, provided by galerie Chadelaud and galerie Marc Maison, serves to vary the sensuous surfaces and complete the picture.
It was the discovery of a collection of over 150 katagami, or Japanese stencils in the archives that gave impetus for the exhibit.

These katagami, bought by Eugène Prelle in the 1860s,  were studied for elements of flora and fauna and geomtric shapes then used to inspire the manufacture's own woven silk designs. Certain designs were created by designer Eugène Prelle himself. Throughout the exhibition we can admire the framed katagami as instructive in our understanding of the derived fabrics and as beautiful objects in their own right.
The second half of the 19thcentury fell under the powerful spell of Japan. Even the Goncourt brothers succumbed; these collectors and supreme literary powers of the 19th century often expressed  their fervent and exclusive devotion to the 18thcentury in matters of art and decoration and declared that they disliked any styles outside of their siècle de joli  be it Greek, Medieval, Renaissance --- with one exception,  the art of Japan.
Japan's prints and decorative objects were to change the face of Western arts. At first, there was a rush to create rich and exotic interiors using imported screens, ceramics, and other art objects that were destined for boudoirsand fumoirs. All the shops for the home had at least a Japanese corner for furnishings and bric à brac and there was a proliferation of the style in French-made furnishings and objects.

The owners of these objects found it fitting to wrap up in a kimono to be in harmony with their surroundings.  The gradual freeing up of forms and motifs is evident in these paintings whose characters pass from observers to participants to integral parts of the whole.
Little by little, less passively, more subtly and profoundly, artists and artisans integrated not just motifs but Japanese design concepts, with their penchants for asymmetry, important negative space, and bold, flat pattern and contrasting colors.

The world of textile design, despite the technical constraints of repeats developed
in a similar spirit. The stage was set for Art Nouveau, Art Deco and beyond. These concepts would influence a great part of modern art whether fine or decorative.
Highly instrumental in spreading the Japanese aesthetic was Siegfried Bing and his journal, Le Japon Artistique, published from 1888-1892. Naturally, Eugène Prelle was in possession of the journal.
Said Bing in the introduction of the first issue,