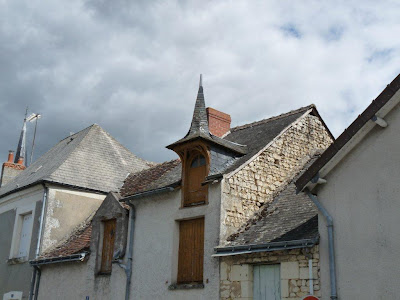 I saw it from a distance - the perfect witch's hat. 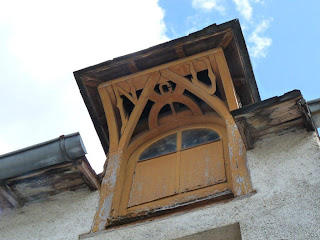 Up close, a significant carving.
"I found her in the inn sitting in the chimney-corner, in one of the high backed oaken chairs carved with barbaric hieroglyphics which are particular to the country. The firelight threw into relief her fine sibylline features. She had flung aside her mourning-cloak but her head was still muffled in a black woolen hood, the flaps of which fluttered over her shoulders with every breath of wind let in by the opening door, like the wings of some ill-omened crow, just poised for flight. With her hooked nose and burning eyes, her dry and sunken mouth and the curve of her lips, she had an almost Dantesque expression, nor did it surprise me in the least when our hostess said to her quite simply and without a touch of mockery:
'It's true, old Nanna, is it not? that you went once to purgatory, and that there has been a burning smell about you ever since?' "
All Soul's Eve in Lower Brittany
Anatole Le Braz
1897
Posted by gésbi at 11:09 AM 4 comments:

with distaff and spindle in hand

"Mater Admirabilis is a fresco depicting the Virgin Mary, at the Trinità dei Monti, a church in Rome. It was painted by a young French girl, Pauline Perdrau, and has been associated with several miracles.
Legend has it Pauline had been asked by the nuns at Trinità dei Monti to paint a mural of the Blessed Mother. After weeks of painting, Pauline finally finished her work. When the Mother Superior saw it, she said the colors were too bright and bold and immediately covered it with a large piece of fabric. Years later, Pope Pius IX was visiting the church and questioned what was behind the drape. The Mother Superior tried to distract the Pope from it, but he demanded to see it. When he drew back the fabric, it revealed the painting Pauline had created years before. The colors had faded and blended together to create a softer image than the years before. The Pope declared her Mater Admirabilis, mother most admirable. He told the Mother Superior to never cover this beautiful piece of work again."
text source and additional photos, including the original fresco: Wikipedia
Posted by gésbi at 5:31 PM No comments:

The Figaro reports on a forgotten gown owned by the Empress Josephine which has recently resurfaced.  The dress was sent for restoration at the embroidery atelier of François-André Picot, official embroiderer of the Emperor in the beginning of the 1800s never to leave the workshop. It is now up for auction at Osenat in a sale of Empire objects and furnishings to take place December 4th at Fontainebleau. One assumes sufficient time has elapsed for the garment's perfect restoration.

They are monuments - there for us to look at and remember the life that once was, yet we may feel we are intruding if we try to look too closely. Photographer Antoine Schneck has given us a large scale study of the gisants or recumbent funerary sculptures at the royal necropolis at the Basilique de Saint Denis just north of Paris. As isolated subjects on a black ground, we are called to pierce the intimate sphere of these departed kings and queens in a way that still inspires hushed respect.

The last post wished to congratulate the recycling efforts in the textile domaine, but left me yearning for an eyeful of textile treasure. And then I remembered that the Musée de la Toile de Jouy has a beautiful exhibit on at this very moment, Parties de Campagne. 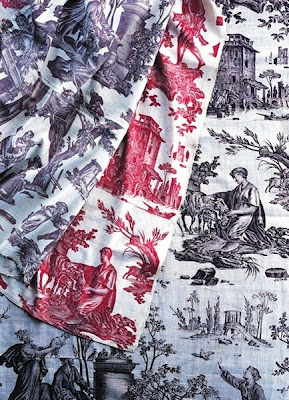 The theme is naturally the depiction of the countryside and gardens as seen in the printed fabrics of Jouy and other French maufacturers. These narrative and idealized views of the countyside were first imagined by Jean-Baptiste Huet 1745-1811, who was painter to Louis XV and designer for the Oberkampf manufactory. 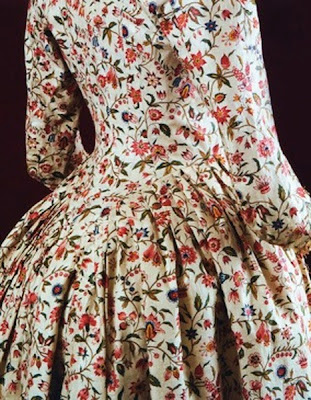 The installation of the exhibit was imagined by designer
Philippe Model. 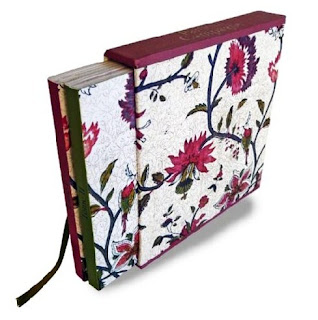 To accompany the exhibit, a catalogue which promises to be as informative as it is beautiful is available on line through the boutique Oberkampf. 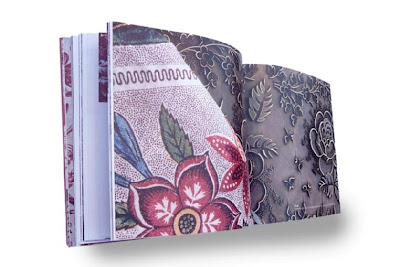 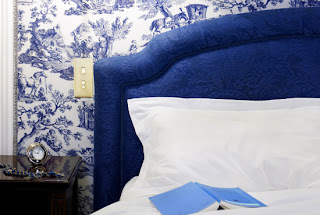 Closed for renovation, the mythic hotel Prince de Galles, just a few steps away from the Champs-Elysées on the avenue George V auctioned off its furnishings last February -  but what became of the toile de Jouy fabric that made up its curtains and bed spreads?  It has been made into smart blue and yellow reversable bags, easy to fit into a purse and take out for magazines, errands, extras. The French-made bags were limited to a series of 300; each tote is numbered and is sold on the site Bilumstore, specialist in the recycling of advertising banners...

and even air bags!

Each bag is one of a kind and very resistant.
Posted by gésbi at 5:22 PM 2 comments:

A plan to keep my hand in

Oh dear, it's been a long time since I've been here. I've thought of you often, all the same. There are so many little tidbits of things I'd like to share and also several articles begun and waiting to be finished. So I'm pushing at the door and moving things around.

I've changed my 'published by' persona, just to prove that changes were afoot and to make navigation back and forth from my two blogs, Le style et la matière and St Tyl more clear.
One person, two blogs: Gésbi.
It's me. I'm home.

In honor of India


A fabric lover's dream, it takes five and 1/2 meters of material to make up the traditional sari, a garment still associated with weddings and important occasions even if western attire is typical for everyday wear in India. This month, Hèrmes is presenting its own version of limited edition saris in its 3 Indian stores.
This marriage of French and Indian fabric traditions was developed in Lyon under the artistic direction of Pierre-Alexis Dumas. The collection includes four silk prints: New Springs in mousseline fabric; Fleurs Indiennes in double mousseline, Coupons Indiens in cashmere and Patch in silk twill.

This is the second edition of saris produced by Hermès. The first was made in collaboration with artist Sunita Kumar in 2001 whose own sari, made of several Hermès scarves sewn together, first inspired the idea at the time.

for more: CNNGo Mumbai
Europe1
Posted by gésbi at 2:00 PM No comments:


The most ethereal elements of the Asian art collections at the Musée Guimet are these gossamer garments of the finest muslin. They were created in Lucknow, today the state capital of Uttar Pradesh in northern India and in the 18th to mid 19th century  home to one of the most brillant, cosmopolite and  lavish courts in India.  The economic and political eclipse of Delhi in 1739 permitted the wealthy ruling Nawabs of Lucknow  to attract some of the greatest artists of the time, whether writers, painters, poets or weavers. The museum's Riboud collection contains magnificent examples of the textile designs of the period, in particular the local specialty of white-on-white floral embroidery known as chikankari. 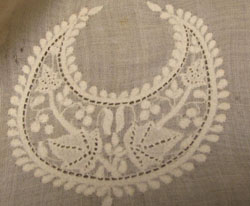 Detail from the short vest above probably made between 1850-1900.  This crescent moon decoration is a traditional design known as ambia. 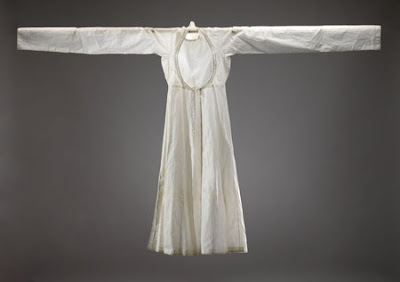 Chikankari is known for the extreme delicacy of its whitework - mostly florals - and also for the fineness of the cotton support resulting in a cloud-light muslin. This muslin called malmal produced in Bengal, was already famous in antiquity. The threads of cotton needed for its manufacture were so thin they could be woven only during the monsoon season, moisture making them less brittle. 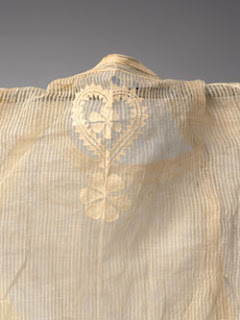 The chikan was usually embroidered on the sleeves, back or neckline of the garment. The muslin was so fine that often the garment could withstand only one washing, which is why so few pieces have come down to us.

With the fall of the Nawabs of Lucknow, the demand for chikankari collapsed. However, it is estimated that even today 35% of the population works for the Lucknow chikan industry. As John Gillow explains in Traditional Indian Textiles, the last two great master embroiderers died in Lucknow in the 1980s and the industry has turned towards the mass market.  Some quality embroiderers may still be found to work on commission.
source: Musée Guimet, Aurélie Samuel, Textile Curator
photos: © Musée Guimet / 2011