The widow Désarnaud (née Rosalie Charpentier) was the owner of the renowned boutique in the galerie de Valois of the Palais Royal named A l'Escalier de Cristal.  She opened the shop in 1802 as marchand-éditeur after the death of her husband and went on to influence the taste of her day. There she specialized in objets of great technical and aesthetic innovation, many composed entirely of crystal and gold plated bronze. What the previous century had done incorporating porcelaine into objects and furnishings, Mme Désarnaud-Charpentier did with crystal in the 19th. Very few crystal furnishings
have come down to us today.


This innovative table de toilette , donated to the Louvre by Claude Ott and Maurice Segoura in 1989, once belonged to the Duchess de Berry, daughter-in-law of Charles X. It was designed in 1819 by Nicolas-Henry Jacob, student of David, and received a gold medal at the Exposition des Produits de l'industrie. Entirely made of bronze and crystal, with the exception of a beech seat frame, the back of the armchair presents the shape of a lyre. The glass table top rests on four cornucopia and two balusters and is mounted by a duel-faced mirror flanked by two three-branched candelabra held by figures of Flora and Zephir. The drawer contains a musical mechanism whose melody is released, as a text specified at the time,

"pendant une heure: c'est-à-dire, pendant l'espace de temps qu'une jolie femme peut décemment passer devant une glace, en presence d'elle-meme.
for a duration of one hour: which is to say, for the amount of time a pretty woman may decently spend before a mirror in her own presence." *

As of 1822,  it seems the mirror framed the graceful features of the duchesse de Berry whenever she sojourned at her country residence, the château at Rosny-sur-Seine. The Duchess, enthusiastic patron of the decorative arts, was forced to give up her scintillating accomplice in beauty after the fall of Charles X in 1836.

On display today at the Musée du Louvre, the looking-glass, having forever lost the melodious exchanges à deux with its mistress, stares out in mute indifference at art objects and on-lookers alike, admired for itself now rather than consulted. 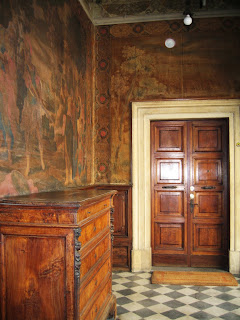 "The dwelling beomes the museum of the soul, the archives of its experiences;
it rereads there its own story, eternally conscious of itself."

Mario Praz The Philosophy of Decoration 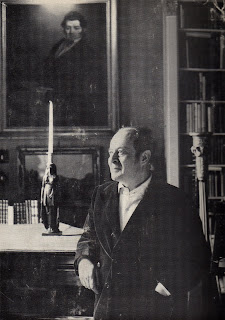 jacket illustration The House of Life by Mario Praz