The location of the Basilique St Denis to the north of Paris is not the most inviting place. I hadn't been since my first year in France so long ago!
But, once in the door, the guide was fascinating and the artifacts are rich, so there was much to appreciate despite the creeping cold through my not-so-thin soles in this lovely month of March.

To see the royal sepulchers, it is the place to go.

Was it just that day, or is it a place more solemn than sacred? Even that feeling was reduced by sassy little putti who preened and taunted. Oh, the vanity of men - and when those men are kings and queens -

- very earthly all the same.

A replica of the faudesteuil Dagobert is under the crucifix. (I've written about it before here.) What is this throne, ancestor of the fauteuil and kin to the Roman curule doing here behind the altar?
Dagobert reigned for ten years from 603-639.  He was the first king buried in the basilica and is considered the founder of the St Denis Abbey. In th 13th century, before Saint Louis ordered the first 16 recombant figures to inaugurate the royal necropolis, a colorful tomb of exceptional dimensions was already concecrated to Dagobert. The original throne was part of the cathedral's treasure and is today in the Bibliothèque Nationale de France. Napoleon was seated on it for the distribution of the very first legions d'honneur.

Then, behold, a message :

For anyone who exerces his capacity to reflect, the appearances of beauty become representations
of an invisible harmony.
Pseudo-Dionysius the Areopagite

For some closer looks at the statuary in a previous post and further links, click!
Posted by gésbi at 12:03 PM 7 comments: 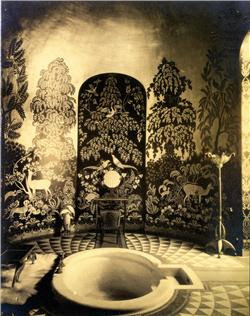 The collection of the Duchess of Alba by the legendary Armand Albert Rateau will be auctioned at Christie's Paris in the month of May. These interiors, so fanciful and yet so ordered have an other worldly quality and even more so in period pictures.

“The House of Alba has decided to sell the Armand Albert Rateau furniture commissioned by the 17th Duke of Alba, don Jacobo Fitz-James Stuart in the early 1920s in France, in order to support the funding of its heritage and of its various palaces throughout Spain as well as supporting new projects for the family.... These pieces of furniture are all that remain of a larger ensemble that no longer exists. They do not form part of the historic collection of the House of Alba nor do they relate to the history of Spain”, stated the House of Alba.


The palace of Alba project is in the same spirit as his work for Jeanne Lanvin and dates to the same period. "Armand Albert Rateau’s bronzes are creations of infinite poetry and of exceptional quality and subtlety. They relate to the hedonist world born from the designer’s imagination and nourished by his first journey to Naples and Pompeï in 1914, accompanied by a group of friends which included the jewelry designer Cartier and with whom he visited the sites revealed by archeological excavations at the end of the 18th century. During this trip he discovered the bronze furniture on show at the Naples Museum, as well as the wholly fantastic universe created by the decorative frescoes which covered the houses at Pompeï. "

The above lacquer panel is from the Pavillon de l'élégances at the 1925 Exposition des Arts Decoratifs.
Though the contents of the rooms decorated by Rateau for the Duchess of Alba never traveled outside the palace, the designer did create a reconstruction of the commission which was exhibited in Paris and New York, showing the importance he gave to the work. The panels are not included in the sale. You'll have to hire someone to help you if you want the marble tub and bronze and gilt wood furnishings to have a backdrop.

The fabrics produced at Tassinari & Chatel are among the most sumptuous, most refined, most sought-after in the world of historic silks. In addition to exclusive made-to-order lengths for decorators and historic buildings, its Collection Patrimoine  is comprised of historic re-editions that span the centuries from the Renaissance to Art Deco, a treasure for  textile connoisseurs  the world over. Rare are the manufacturers today capable of  producing cloth of this level of technical and artistic perfection, but with a foundation that dates to 1680, this monument of textile history from Lyon has more than what it takes. Through the years, noble stones - Pernon and Grand Frères - have enriched the edifice. Today, the firm continues in the good hands of Patrick Lelièvre of the group Lelièvre.
So what is new in 2013?  The savoir-faire gained through the centuries has met with the ancient tradition of contemporary design. After all, those cherished historic designs were contemporary at some point! Following in the footsteps of Revel, Pillement, and more recently Lalique and Karbowsky, Mr. Jean Boggio has worked with the mill to create new fabrics every bit as worthy of the silkweaver as his predecessors. It's is history in the making.

Majestic lampas (brocade), Ispahan
Not many designs have been more fertile in textile history than the pomegranate. Ispahan places the mythical fruit among heady roses in a swirling Persian garden, at once lavish and playful.
Baroque spirit and bizarre style: this may be Jean Boggio's first textile collection but he is no novice to textiles. He has not only chosen the quintessential textile fruit for Ispahan, but his design calls to mind that brief but exuberant period of Bizarre silks from 1695-1820, where fruit, flower and fantasy (very strange objects sometimes) are caught in a vortex creating lively, asymmetrical, sometimes surreal designs. The 18th century fabrics typically have a juxtaposition of brocaded decor with damask vegetal or shadow elements that give a moving, 3D quality. Here, note the artistry of multiple weave patterns in the decor. Instead of a damask ground, there is finely etched foliage created by the weft.
The preliminary drawing of Jardin d'Eden from the hand of the artist, Jean Boggio...

and as interpreted on the looms of Tassinari & Chatel.
The effect is exotic and modern in this smooth, etched satin. Funny, I see a wink to very ancient techniques,
just a suggestion of a Safawid incised twill here in this luscious, breathable atmosphere somewhere along the Silk Road.
Soliman Border
To my way of thinking, borders are some of the most refined textile elements for ---
the elegant underlining of the contours of the velvet settee, drawing your eye to the moldings of the ceiling, tailoring the edges of the curtains.... We don't see enough borders, so it's nice to see this one and to know that Ispahan is available as border, too.
Breaking with the vegetal world, but continuing the vocabulary of the designer, Petrouchka represents an acrobatic frolic with the stars, sun, and moon as props for the joyous jugglers who dance in pairs over this silk and linen brocatelle.
Cushions made of Petrouchka and Soliman

The exotic baroque world of jeweler-silversmith and furnishing designer, Jean Boggio, is filled with themes of dreams, dance, and jungle flora with a style that has a certain affinity with Armand Albert Rateau.(I've written of the furnishings here.) The aesthete has an exhuberant, warm style and is clearly smitten with Tassinari & Chatel; he has an entire collection of vests fashioned with silks from the Collection Patrimoine that he wears close to his heart!
Posted by gésbi at 2:03 PM 6 comments:

Instinct is the nose of the mind.