Captivating Lallemant. There - I thought I’d get the decorator’s name in right away, because he’s new to me and though I don't know much about him, I’m suddenly very enthusiastic. Maybe it's because he's a little mysterious still.
And maybe I'm making a rash judgement basing my interest on very little. It all began with this one appealing salon that first drew me in with its ringed rug.  How many times have I skimmed this picture imagining the promise of  our universe calm, classically arranged and beautifully colored at my feet? Then came the scanty bits I discovered about Lallemant on the internet; a little knowledge is a dangerous thing?

This apartment is the only example I have seen of his interior work. The ceiling is not high but that’s not a problem here. I like the way the lighting for bookshelves is integrated into the neat overhanging coffer which continues with intelligent shelving on the sides; a coffer alone on the ceiling would have cut down the impression of height. The rug expands the space too. Everything is in its place, ship shape. The theme is astronomical: metal spheres are used as supports for the coffee table;  the mirror frame is painted with planets and is perfectly aligned to the contours of the globes over the mantel; there's an armillary sphere next to the desk on the right. (Click to enlarge.)
This is the dining room that faces the above space and repeats the rounded shapes in the rug, table and chairs. A collection of antique ceramics occupies the end wall. With simplicity, very defined interests are indicated.
I have been wondering if this apartment on the avenue Montaigne belonged to an astonomer, an explorer, or very chic astrologer - maybe Yaguel Didier in a past life.  What I have discovered of Robert Lallemant is that he is famous for ceramics (which explains the importance given to their display) but I find nothing elsewhere about his interior decoration work.
In 1923, reports Ceramique 1900, "he buys a small workshop of "bleus de Sèvres" at 5 passage d'Orléans in the 13th district of Paris, which he later moved to Quai d'Auteuil. He starts then, with the help of
his wife, a very avant-gardiste production. For each of his models he makes a
drawing then a plaster on which he keeps working until he gets a perfect shape; then he makes a mould." His early works of 'mecanical faience' often have images of France, proverbs, popular songs, sport, history, geography, myth.... the style is charming and often resembles the work of illustrators Jean-Emile Laboureur or Charles Martin.  He is one of the rare artists of this medium, along with Jean Luce, to have created ceramic works in the true spirit of modern creation of the 1920s.
See more examples here.
His geometric models show the same artistic preoccupations as in the top picture.
Christie’s biographical notice says,
A pupil of the ceramicist Raoul Lachenal during the early 1920s, Robert Lallemant worked mainly with faience, exhibiting his early independant work at the Salon des Artistes Décorateurs and the Salon d'Automne. He swiftly received positive reviews, which in turn led to an exhibition at the Berheim Jeune gallery in 1929, alongside Djo-Bourgeois, Pierre Barbe and the Martel brothers, where he concentrated on works in ceramic.
A founding member of the UAM in 1929, Lallemant contributed furniture, combining wood, metal and glass, to the inaugural exhibition at the Salon de Marsan the following year. In 1933 Lallemant joined his father-in-law's public works company, and in so doing abandoned his successful artistic career.
We do see armillary inspiration in the period as demonstrated by this famous example by Jean Royère made in 1940. Lallemant stopped his design career in 1933. Maybe his table inspired Royère?
Spheres and round shapes show up frequently.
During WW II, he was for a time in charge of the military service artistique and he also sailed regularly with the Marine Française where he documented life aboard ship with uncommon artistry.
Other photographs attest to his travels through Africa.
We don't know why he chose to give up an enormously successful career in ceramics, but it looks like the themes of the apartment above and the ceramics I have chosen to illustrate this post may have demonstrated his own interests and desire to explore other horizons.
Robert Lallemant lived from 1902 to 1954, and left traces of a short but well-filled life.
Posted by gésbi at 3:56 PM 8 comments: 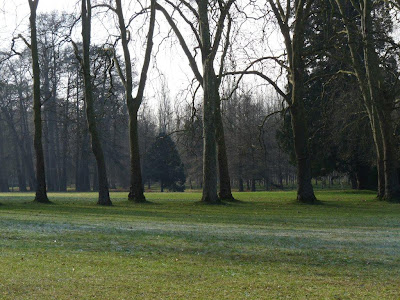 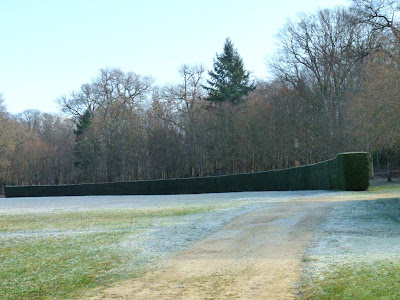 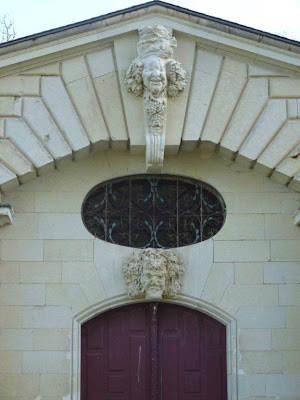 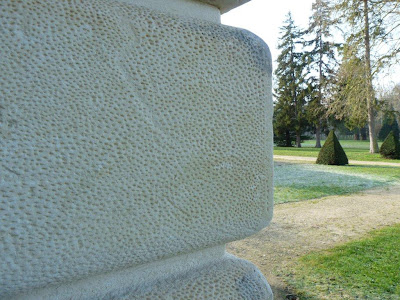 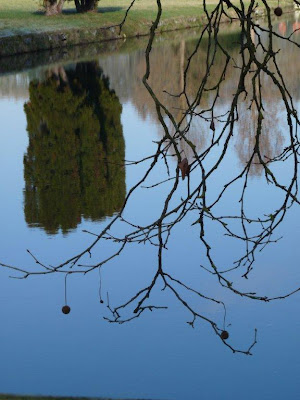 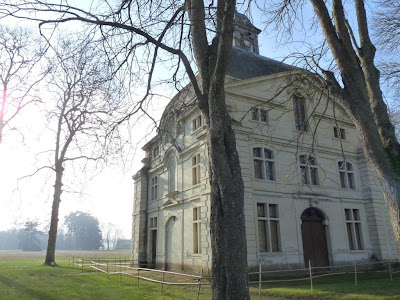 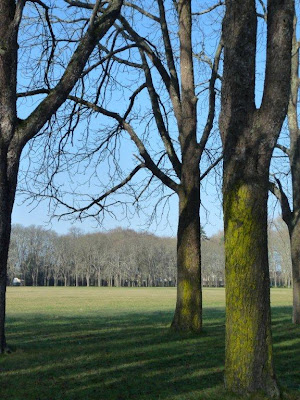 Silly? I bought a footstool because of the slip of velvet on it was in harmony with my mood after seeing Beauté, Morale, et Volupté dans l'Angleterre d'Oscar Wilde at the Musée d'Orsay or as the exhibit originating at the V & A is known in English, The Cult of Beauty: The Aesthetic Movement 1860-1900. The exhibit will soon head to San Francisco.

The Aesthetic Movement called for 'art for art's sake' and was a revolt against moralizing views and the industrial age where machines made it possible to turn out furnishings faster than it was possible to design them (well). The aim of the House Beautiful was to be personal; it's furnishings artistic -that is, it should break away from heavy Victorian eclecticism. But as with any historic movement, the impetus for change came from several directions. Without going into all the tenants of the movement and its sometimes fuzzy relation to the Pre-Raphaelites or to Arts and Crafts,  the fact that Japan opened to western commerce in 1862 after a self-imposed trade freeze of 250 years strongly influenced the design sense of the day.
And my velvet footstool, printed with cranes and foliage, is part of the trend tinted with Asian refinement which swept through France as well as England at the time.

This vase was another pleasing trouvaille that same day and a continued proof of purchase under the Aesthetic spell.

I would love to be able to trace this.


and maybe some blue and white china.

It is an odd thing, but everyone who disappears is said to be seen at San Francisco. It must be a delightful city possess all the attractions of the next world.
O. Wilde

Admittedly, this style could tend more toward an artistic spirit than toward consistent quality of fabrication as did the of Arts and Crafts  ideal. The poseur of design movements, achieving the 'look' was sometimes enough for the Aesthetic philosophy.

Moving along with the general idea of Aesthetic interiors of the end of the 19th century, though not a quality piece, I also spotted this idiosyncratic character (well, I see what it is, but robbed of its cushions there's a certain gauche charm) and for a mere 35 euros, I thought of putting it in the country house. For Whistler and Godwin the fully orchestrated interior concepts!  Otherwise, a mingling of this and that - antiques, painted sideboards and Japanese decorations - is entirely acceptable! And I've already justified fudging in the paragraph above.

Not always, but most often, I am the one who leads our own personal aesthetic movements in the household, but this particular chair did not inspire Monsieur. Submission can be necessary for the
harmonious house beautiful.
He was probably right, but I still like something about that awkward armchair.

The dimming of the light makes the picture clearer
It's just an old photograph
There's nothing to hide
When the world was just beginning
I memorized a face so it's not forgotten
I hear the wind whistlin'
Come back anytime
And we'll mix our lives together
Heaven knows- what keeps mankind alive
Every hand- goes searching for its partner
In crime- under chairs and behind tables
Connecting- to places we have known
I'm looking for a
Home- where the wheels are turning
Home- why I keep returning
Home- where my world is breaking in two
Home- with the neighbors fighting
Home- always so exciting
Home- were my parents telling the truth?
Home- such a funny feeling
Home- no-one ever speaking
Home- with our bodies touching
Home- and the cam'ras watching
Home- will infect what ever you do
We're Home- comes to life from outa the blue
Tiny little boats on a beach at sunset
I took a drink from a jar
and into my head
Familiar smells and flavors
Vehicles are stuck on the plains of heaven
I see their wheels spinning round
and everywhere
I can hear those people saying
That the eye- is the measure of the man
You can fly- from the stuff that still surrounds you
We're home- and the band keeps marchin' on
Connecting- to every living soul
Compassion- for things I'll never know
Album: Everything That Happens Will Happen Today
Posted by gésbi at 11:01 AM 4 comments: 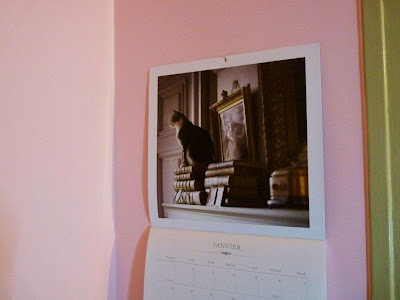 The year is getting off to a nice start. I always like to find a calendar for the kitchen that will make me happy all year long. This one is called Les chats en France. Photographer, Rachel McKenna, originally from New Zealand also shares a love of
three things dear to me - France, interiors and cats.

Her book of the same name is especially delightful - because 12 pictures may not be enough to satisfy...
and it is always interesting to see the cover choices for the different editions.