I've always loved painting and I've come back to it with a passion.  It seems to me that nothing could be better nor more beautiful, than to express with color, to cry out all the emotion given by nature's pageant.

I found this painting some years back, never really believing the signature "Paul Poiret" in block letters meant The Paul Poiret. I just thought it a pleasant painting. Later, I stumbled on other paintings with signatures that matched mine and proved it to be by the fabulous couturier whose dramatic existance matched his passionate personality. This was the same revolutionary man who freed women of their corsets and granted passage to fresher sensuality with flowing and colorful gowns, split trouser-skirts, and exotic turbans. I've written about Poiret before and once again from the harder times of his life. For his glamorous days, this might do.

His life's ups and downs owed much to his fatal flaw, that of being dépensier. His wallet could never match the magnitude of his flamboyant, generous personality, although he knew great success.  He was an uncontrollable spendthrift in the interest of his art and art de vivre in the Belle Epoque and remained so even when World War I had come and gone and had changed the face of the world down to the habits of the glamorous elite.  He is all the more touching because of his flaw and because he kept on creating - writing and painting - no matter what condition his finances were in.

And look here - my painting is seen within this painting on the lower right.

When they see the art objects and books I have collected, many will be astonished to find nothing outlandish, few or no cubist effects, and no surrealism at all. I cannnot stand an artistic language when it has a nebulous and inaccessable character. Nature seems to express itself clearly: why should man seek to complicate it?


This would seem to apply also to Poiret's own paintings be they ever so humble along side the artists, often friends, he collected :


Posséder un objet, c'est un peu caresser la main de l'artiste qui les fabriqua...
To possess an object is a little like stroking the hand of the artist who made it...

*the quotes by Paul Poiret are from En habillant l'epoque
Posted by gésbi at 1:11 PM 3 comments:

If the world seems to having trouble turning round these days, there is always one more love story worth telling. Everytime I'm on the chateaux trail, I fall head-over-heels at least once, and Villandry, a château most famous for it's gardens, is a place worthy of more than a passing flirtation. Its recent history, that of the present owner's family, is a true love story as well, between a Spaniard, Joachim Carvallo, and an American, Ann Coleman. The two met in 1896  in the Paris labortory of Nobel Prize winner, Dr Charles Richet. Dr Carvallo was conducting medical research there when the very determined Miss Coleman arrived to study physiology. Carvallo was a brillant but penniless Madrilenian and Coleman a wealthy but free-thinking woman from Lebanon, Pennsylvania.

They were married in America, then returned to live in Paris. The couple soon sought a summer home and in 1906 they settled on Villandry, built in 1534, the last constructed of the great
Renaissance Loire Valley Châteaux.

Along with their scientific preoccupations, the couple both enjoyed history, poetry and art.

They saw in Villandry a suitable setting for their growing art collection, focused primarily on Spanish Renaissance painting.

As anyone with restoration work in an ancient abode soon discovers - no matter how large or small the project may be, there is always more at hand than first meets the eye. Carvallo wrote of his first impressions of his acquisition,

I was near Lyon when I heard about this property. I came to visit. The castle was all windows, balconies, sham openings. The park was designed in the English fashion, in hills and vales...
The castle itself disappeared in the middle of a forest of trees and greenery ... The whole, however, pleased me. The price did not seem exaggerated. The deed of sale was signed within the hour. Two days later, the poor man died of gout. When, in early 1907, I came to settle Villandry, I was terrified, looking closely at the castle and property, the crushing burden that I had assumed.

The "summer home" was to become an all consuming occupation, a puzzle to be solved. The Renaissance buildings had undergone many transformations through time  (some by aesthete Boni de Castellane) which the Carvallo couple would remove in order to restore the exterior its original state...

while for the interior the traces of successive lives from various periods were left in place,
as the chateau became little by little a real home to the Carvallo family.

The kitchen is the only room to have a Rennaissance theme.

A wonderful sense of courtesy prevails at Villandry; a guard removed the separating cord in this room to accommodate this photographer. 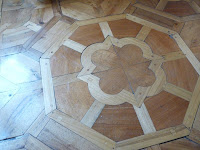 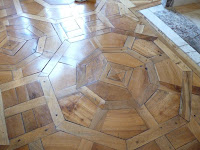 Beautiful geometric parquet prepares the sight of the gardens beyond.

To complete the period character of the château, Carvello did away with the English gardens created in the 19th century and reinvented gardens in the spirit of the Renaissance
which are today admired around the world.

The gardens closest to the chateau are constructed as 'salons de verdure' that speak of love.
They were designed by Lozano and Winthuysen.

Amour tendre is symbolized by hearts separated small flames and capped with white ball masks to permit intimate conversation - earnest  or frivolous.
Amour passionné, hearts again but rent by passion. The boxwood hedges form a maze and suggest an impelling whirling movement.
Amour volage has 4 fans in its corners to represent airy sentiments and borders with
the pointy horns of deceived love.
Amour tragique  is depicted with the blades of daggers and swords used in rival lovers duels.
In summer, red blossoms symbolise bloodshed.

Today the chateau and gardens and restaurant are owned by the Carvello descendants who cater well to their visitors with the sort of charm and warmth found all too rarely in a highly visited monument.

Our story could have been another one entirely, as quite young,
Ann Coleman had another exotic suitor.
see here...

This is the continued story of "Amour x  4" from my other blog,
Le style et la matière.
It is a tale of courtship that, though unsuccessful, undoubtably left a lasting, if amused impression on la belle -- and textile traces in the wardrobe that she brought with her to France.
Ann Coleman's father met the Mandarin, Mr Woo, on a journey to China in the 19th century. Around 1877, Mr Woo traveled to the United States to study the American postal system in view of modernising the Chinese Imperial Post. As a guest of the Coleman family in Pennsylvania and in keeping with Chinese customs of propriety, he asked for the hand of the last born daughter, Ann, who was two years old at the time. Mr Woo gave many presents to his host as proof of his intentions including his portrait and this embroidered coat.

The coat in question is at the château of Villandry which Ann Coleman later called her home with her husband Joachim Carvallo.
Posted by gésbi at 5:05 PM 2 comments:


The stand of Art et Floritude, an enchantment at Maison et Objet 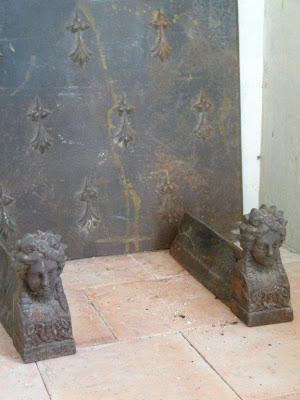 So much for refinement.
I'll be off this weekend to heat a very cold house in the country with the help of some very obliging women. 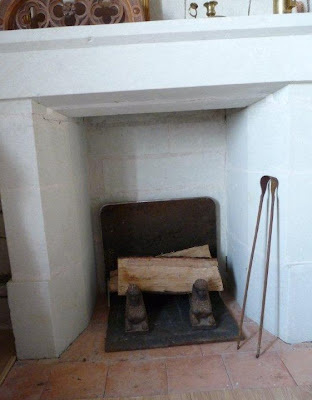 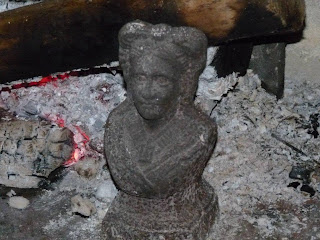 
In the meantime at St Tyl... there's an An Army of Handkerchiefs.

"Sizing for cloth of wool, silk, gauze and other articles of the sort"
"How to recognize if a wool cloth contains cotton"

The humble handkerchief as a societal phenomena. This exhibit shows just how important this ordinary little item could be in the context of soldiering and its use as means of communication before being supplanted by films for the enlisted. Of the mutiple intentions and uses - historic, commemorative, fashion accessory, first aid supply, article of hygiene-  I've chosen to show the instructive side of these little squares of cloth.
If we were to transport them into a fuller context of society, we might speak of gesture, modesty, flirtatiousness, theatrics, affectation, romantic souvenirs.... Snif...anyone have a Kleenex?
Musée de l'armée
Posted by gésbi at 10:57 PM 2 comments: