According to tradition, the Virgin Mary gave her belt to Saint Thomas at the moment of her
assumption to heaven. The belt is kept in the Sacro Cingolo chapel in the Basilica of Prato.
As reported in Bigbrowser Blog at Le Monde last week: more than 200 000 Russian pilgrims gathered before an Orthodox relic said to stimulate fertility and protect expectant mothers. 52 people were hospitilized after extensive waiting in weather well below freezing, said Russian authorities. The relic, the belt of the Blessed Virgin, is normally found in the Vatopedi monastary of Mont Athos, Greece where no women are allowed. The venerated textile is on a one month tour of 12 Russian cities.
This relic of  the Blessed Virgin's belt was presented to Geofroy I Boterel by the Patriarch of Jerusalem on his return from the Seventh Crusade in 1252. A mere 8 cm fragment of linen is today kept in the church of Ancenis of Quintin. It was once carried from house to house for the benefit of pregnant women -who often kept a snippet- until Louis XIII put an end to this practice in the 17th century.
Posted by gésbi at 2:58 PM 1 comment:

To think that Michel Biehn fans were sorry to see him give up his beautiful museum quality shop in
L'Isle -sur-la-Sorgue...
yet his new incarnation as hotelier in Fez shows that he knows how to make the right moves.
The decorator/antique dealer specialized in textiles has combined his talents in a spectacular and very personal way at Le jardin des Biehn.
The renovated palace includes a beautiful Andalusian garden, hammam, spa, restaurant as well as exhibits, concerts, sophrology relaxation sessions, cooking and yoga classes....

Michel Biehn used his tremendous collection of textiles and costumes to inspire the interior decoration throughout the hotel. Color palettes and exotic atmospheres are derived from mostly Islamic textiles. 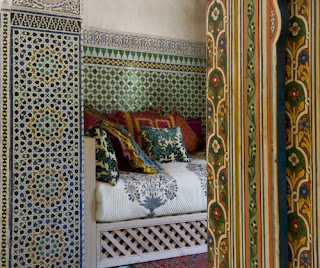 The atmosphere amounts to an artful and joyous textile bath. 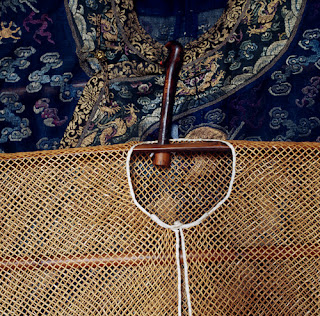 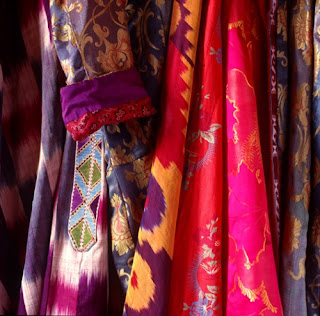 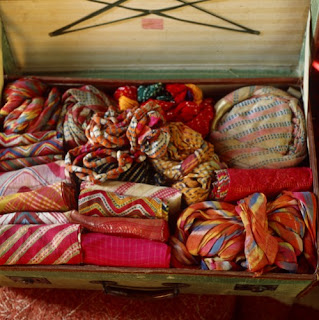 Important note, Biehn's collection largely surpasses the needs of fitting out the hotel. There are changing exhibits in the gallery and -
there's a boutique. 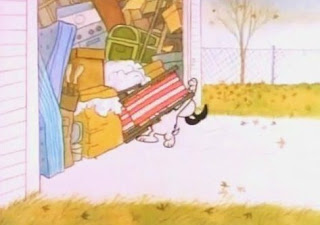 When I was little there was a Charlie Brown special for every occasion and I was even allowed to watch them on school nights. I wonder if children still watch the little block head in the US.
Do you remember Happy Thanksgiving Charlie Brown? In it the great chef and organizer, Snoopy, prepares the dinner table for Peppermint Patti, Marci and Franklin who have invited themselves over for the day's feast. Before they partake in a less than traditional meal of popcorn, toast and jellybeans, 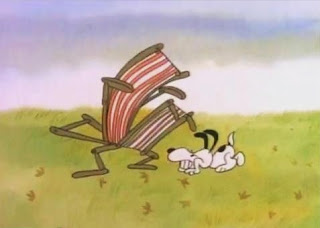 there's a great scene where the resourceful beagle must wrestle with a chair
when setting up a table for the feast in the garden. 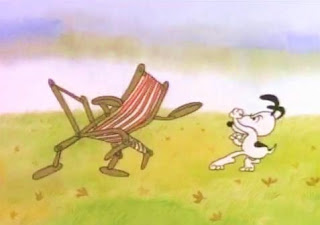 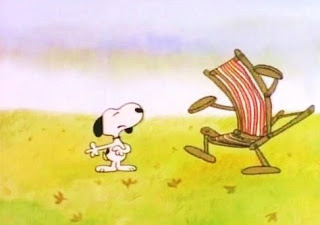 It's time to get out our DVD.
Can you get to old for Snoopy and Charlie Brown? 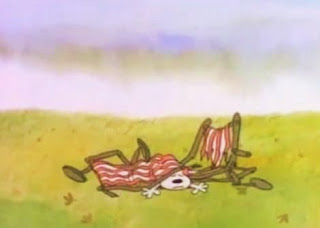 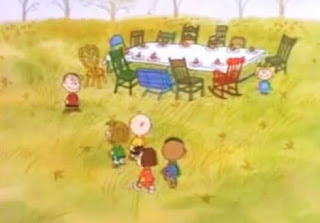 Happy Thanksgiving, America!
Posted by gésbi at 9:23 AM 4 comments: 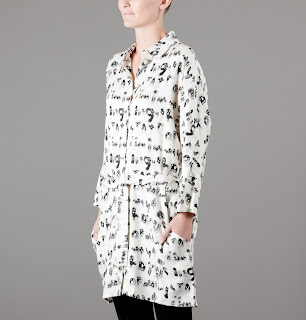 Nuts and bolts of wax resist

A comment from Renée reminded me that I had not explained the wax technique in my post, Wonderful Wax.
Wax fabrics are industrial products that were originally inspired by Javanese batik. The method of making them falls under the heading of resist dyeing techniques. As in printing, an engraved roller is used to apply pattern to the fabric, but in this case, it is melted wax that is rolled on to the surface. (Traditional batik calls for  a tjanting tool - a sort of pen filled with hot wax for drawing directly on the fabric.)
The fabric is then dyed and because the dye cannot be absorbed by the areas covered with wax, a negative pattern is created. The process of applying patterns of wax and dyeing can be repeated to make a design of several colors.
The Vlisco site explains :

The core element in Wax Print is of course the wax. Using two deep engraved copper rollers, with the mirror image of the design, the two sides of the cotton fabric are printed with a pattern of melted wax, hence the name Wax Print. The fact that the cloth is printed on both sides enables you to wear the product either side. This is the true sign of a quality wax print. Following this, the cloth is immersed in a bath of dye, often Indigo, that penetrates into the areas that are not covered with wax. After the wax as been washed off in varying stages, a negative image of the printed pattern remains on the cloth. This intricate wax printing process results in unique effects that makes the product so outstanding. In fact, not one single centimetre of fabric is identical to the other!

I usually buy my "Wax Hollandais" at Toto where these fabrics are sold by weight,
but much greater possibilities are offered on-line.

This post isn't an advertisement for Vlisco, but it's hard to resist the occassion to show more of their designs!
All these Op Art style patterns are from the new collection, Delicate Shades.
Posted by gésbi at 2:24 PM No comments:

Thin as a pin and a stocking cap 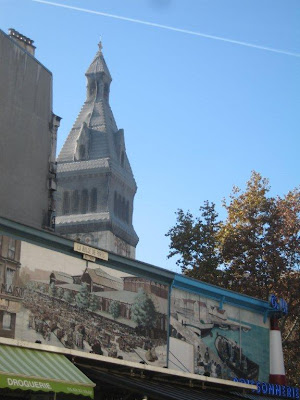 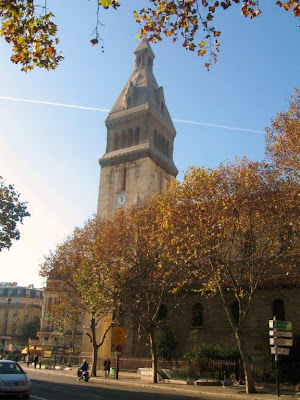 Appearing at the end of the 17th century, growing and trading of the chardon cardère or fuller's teasel counted as one of the essential activities of south Vaucluse and the northwest of the Bouches-du-Rhone until just after World War II. The Provencial teasel had a world wide reputation for quality and was exported all over - to the USA, Russia, and Japan.

Despite its French name, which translated literaly means 'carding thistle,'  the teasel never really was used to card wool but to modify the fabric's surface.  The purpose of carding is to untangle wool fibers before spinning; the 'carding thistle' was used to brush or nap a fabric after weaving, raising part of the weft fibers to make the cloth's surface soft and warm.

Weavers used the heads of teasels for centuries to make combs, then to cover the drums of brushing machines used for this important finishing operation.
After a long and lingering decline, teasel crops and trade in the region came to an end as recently as 1989.
Now mostly off duty - this pretty but prickly plant with a history can be seen growing wild throughout the countryside.
source: exhibit at the Musée Estrine, St Rémy-en-Provence
Posted by gésbi at 9:39 PM 4 comments: 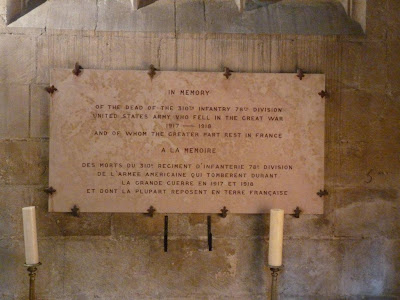 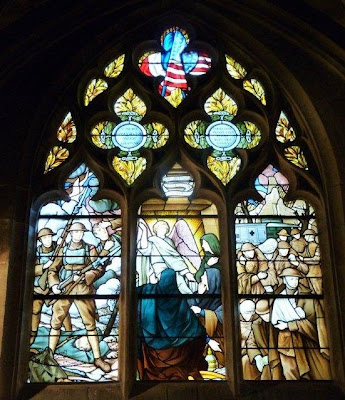 Antennas to the cosmos


I have been turning my eyes to the countryside more often these days, looking at things differently since we now have a house in Touraine. The house, as happy as we are with it, is going to a lot of love and work to get it back into shape. For one thing - minor I thought - it has only one finial on the rooftop, where once there were two.

If you look up even in the city, but especially in the countryside, you will realize that earth and sky are not such separate things as you might have thought. Many of our buildings are yearning upwards with finials and other decorative elements to point the way.
This very old decorative custom began as something functional - the need to protect the roof line from the inclement weather. A broken pot or jar, sometimes with handles, was inversed on top of the exposed wood of the central post that pierced the covering of primitive pagan huts. Now centuries later we often see these same elements, urns with or without handles, minus their original protective function. The idea of roof ornaments may also be derived from the building tradition of crowning the highest point of a house to celebrate its completion with a bouquet final, a temporary decoration translated into durable materials.

A recent exhibition organized by the Eco-Musée of Rennes was entitled Celestial Companions (Compagnons Célestes : épis de faîtage, girouettes, ornements de toiture). I did not see this exhibit but was interested to learn about the finial as a "symbolic link between this world and the celestial universe." This simple ornament is described as a guardan angel or a representation of a protective god of the house and its occupants on duty between earth and sky. Well, I don't know about you, but personally I never turn up my nose at any method of capturing good vibrations.
Phallic forms, animals, fruit, pinecones were there for fertility, well-wishing
and success in the habitation. Sometimes even more directly a man and his pregnant wife are pictured or so they say; I'll report back if ever I find that one.
Urns with flames
The imitation of a bird alighting on the roof is thought to be beneficial for the home
and is natural choice for a dovecote.
On top of churches, it is the ubiquitous gallic rooster who makes himself heard. Symbol of virility, luck, and  the daily resurrection of light, the defeat of darkness. It is often accompanied by a weather vane to show the direction of the wind and most importantly to 'orient' the church, that is to show that the edifice is pointed toward the east.(dictionnaire des symbols)
For more, see an excellent article in French by Dominique Ronsseray
Posted by gésbi at 4:53 PM 8 comments: