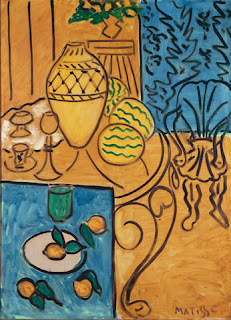 Interieur Jaune et Bleu 1946
Matisse had a strong attachment to the objects he surrounded himself with - ordinary objects that he carried with him from atelier to atelier for over forty years: water jug, coffee pot, Alsasian wine glasses, pottery, shells, loads of colorful fabrics, and good number of chairs.With them, he created his universe of talismans through which he could channel emotion and conjure the beauties of the world.
Mon but est de rendre mon émotion. Cet état d’âme est créé par les objets qui m’entourent et qui réagissent en moi ...
My goal is to render my emotion, the state of mind created by the objects that surround me and that react in me... 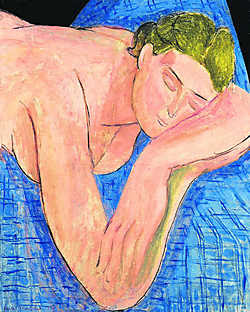 Le Reve 1935 (Lydia)
When in 1943, the aging Matisse sought refuge from bombardments in Nice, it was with the aid of Lydia Delectorskaya that he was able to continue to work in the villa Le Reve in the tranquil town of Vence. His model since 1935, the highly efficient young Russian woman became his assistant and controlled all aspects of running his home and atelier. Less and less mobile, the artist expressed it simply, "sans elle, la maison n'existe plus." For Matisse, she was by turns Mme Lydia, the saint or the Bolshevik.... Whatever it took, for “maison” as anyone who appreciates Matisse must know, was an essential concept for the artist who repeatedly drew his inspiration from the interiors he occupied and the harmonies of objects he constructed there. 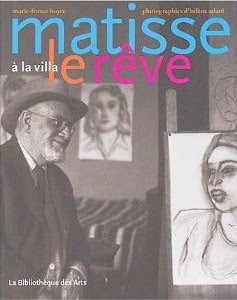 in English or French
Helene Adant, Lydia's photographer cousin, was fascinated by the exuberant creative atmosphere at Le Reve. She visited often and was able to document the intimacy of the artist's working environment, the minute changes of his arrangements of objects such as he determined, or not, to paint them. Adant's photographs of this period from 1943 to 1948 are featured in this captivating edition by Marie-France Boyer Matisse at Villa Le Reve. The compact but rich volume traces back to the sources of Matisse’s inspiration through nature, models, and objects, giving a precious record of the artist’s working processes in the mostly silvery photos of the period. 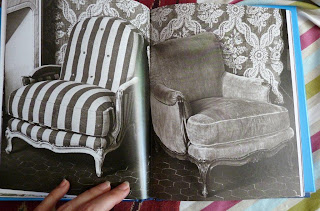 Photographs, sketches, paintings serve as three witnesses of Matisse's constant conversation with the objects and furnishings without which he unable paint. This touching documentary reality exhibits the artist's tools and touchstones before their painted transformation and conveys the importance he gave to them as his “inevitable necessities.” Could there be any doubt? As fascinating as it is to see backstage, the back drops and props don’t contain any magic on their own, yet they resonate as the master’s vectors. My favorite chapter in the book is devoted to chairs, clearly some of Matisse's favorite sitters. 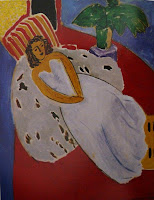 Already in 1908, Matisse had expressed the goal of his painting  was to create an “art of balance, purity, tranquillity, without any worrisome or preoccupying subject … a cerebral tranquillizer, something analogous to a good armchair that relieves physical fatigue.” 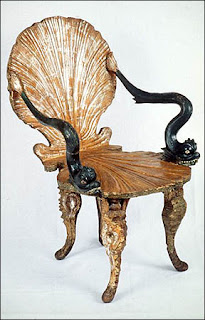 One chair stands out from the rest -- and it wasn’t for the comfort it offered. It seems Matisse was smitten with an ardent passion for its curvaceous figure, its captivating presence. The artist's enthusiasm for the chair acted as a needed stimulus for new creation. The Venetian Baroque beauty was made up of two silver scallops, one forming the chair back, the other its seat. Its arms were reptilian; the legs also lizard-like.
Sketches followed, and the new muse was incorporated into many paintings. 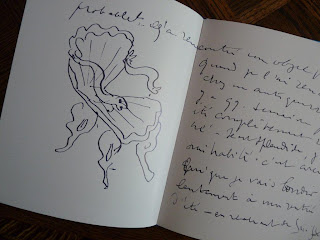 J'ai enfin trouvé l'objet desiré depuis un an. ...Quand je l'ai rencontré chez un antiquaire il y a quelques semaines, j'ai été complétement retourné. Il est splendide, j'en suis habité.
I finally found the objet I've sought  for a year now... When I  came upon it at the antique shop a few weeks ago, I was completely head over heels.... It is magnificent and I am as a man possessed. 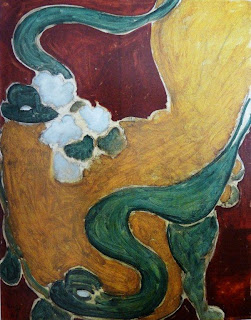 Here the Venetian chair is posed as if it sitting for its own portrait.