A fabric for Clémentine d'Orléans at the Grand Trianon

The last king of France, Louis-Philippe had a particularly intelligent daughter, Clémentine d'Orleans 1817-1907, who became the princess de Saxe-Cobourg. This youngest daughter was so well-known for her ambition and intelligence in political  matters that she received the nickname of 'the Medici of the Cobourgs.' French history is filled with intelligent, influential women and we are reminded of many through the objects they left behind. Before her marriage and installation in the Cobourg palace in Vienna, the young woman naturally she lived with her family in the Palais Royal, the château des Tuileries, and the Grand Trianon.
The curator of the Grand Trianon recently found a chair in storage that has been traced to Cléméntine. The bare bones of the chair, similar to the above reproduction, were in need of adequate upholstery and a fine silk to attest to the memory of this most accomplished princess. Tassinari & Chatel has agreed to share some of what goes on behind the scenes in the case of  such a recreation. Those interested in European textile history will recognize the names of Pernon and of Grand Frères, encompassed now by Tassinari & Chatel. The silk weaver's rich past is attested to by 100,000 textile archives.
Research was first conducted in the Livre de Commandes (order book) of the period . Many a decorative project can be traced there, including those for Malmaison, Fontainebleau, the Elysée, Versailles, the White House, the Ritz... to name but a  few. To make research more of a challenge, certain orders are written in an ancient and obscure stenographic text to assure the extreme discretion demanded by clients concerning their projects.
This particular chair was not found in the records, but the project was not to stop there.

Silk weaver and curator reviewed many designs of the period, until one stood out, a floral by the artist, Grandbarbe. Grandbarbe was very much appreciated for both the original designs of his early career and the re-interpretations of earlier designs for this period that was just beginning to become eclectic and historicizing. It may be that the spirit of Clémentine was guiding their choice because the design fit the proportions of her dainty chaise gondole perfectly!

The woven document from the archives is of great finesse. Here, the record clearly states that the fabric, a brocaded lampas was designed by Grandbarbe in Louis XVI style and provides a sketch of the design. 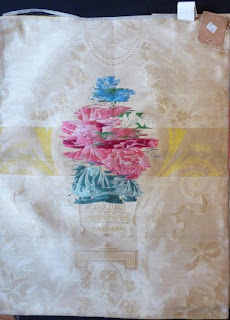 As we have seen before, here, the back of a fabric is just as eloquent as the front. To the left, the back of the original mid 19th century archival document. The lampas technique is used for the grisaille patterns of foliage pearls and vases on a satin ground;  the brocaded effect is as if embroidered  is seen in the 'extra' blue, pink and green threads. This is a sure sign of hand woven fabric. The cloth such as this would have been woven face down as the weaver brocaded the colorful flowers with tiny espolins or brocading shuttles. A corner of the document is stamped Grand Frères, the name of the entreprise during most of the 19th century.
If the woven document still exists,
the mise en carte or technical drawing had been lost to the sands of time.
It was necessary to reconstruct this essential element
that serves to command the loom before the weaving could begin.
Even with today's computer technology the mise en carte is a long painstaking process
for a design as rich as this one.
It took approximately 100 hours to complete the drawing.
then and now
Here we have the original document on the left woven in a width of 54 cm. The weaving for the restoration was reproduced in the same proportions by inserting the design onto an expanded field of satin
within the space provided by modern loom widths. In fact, two full panels were woven side by side between the selvedges in the 130cm width; the fabric here has been cut down the middle.
then and now
The modern version is made entirely in the lampas technique where decorative wefts are
completely attached to the back of the fabric by a second warp.
While the fabric loses the extreme lightness of handle of the original, it gains strength -
an excellent idea for upholstery.
Louis-Philippe, the so-called roi bourgeois, did not wish to occupy the château of Versailles, but installed his family next to it in the Grand Trianon. There he found it necessary to make some changes to accommodate a different lifestyle - and his 8 children.
Clémentine occupied apartments that had first belonged to
Mesdames de Maintenon and de Pompadour, then to Napoleon I.
Her freshly upholstered chair can be found there today.
Posted by gésbi at 6:00 PM