dreams and realities in decoration 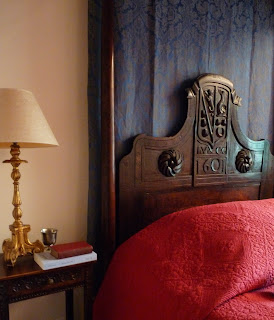 When I found my own four-poster bed from the Burgundy region, I researched the details and the general
subject - naturally! I discovered that, according to Peter Thornton, Carpaccio's 1490 painting the Dream of St Ursula is perhaps the first representation of a posted bed . There isn't much resemblance between my bed and St Ursula's, but both do have blazons on the headboard. Hers is her own shield. I've never uncovered the associations on mine. 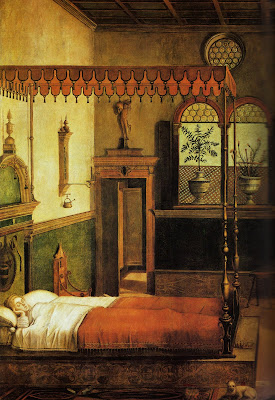 detail
Sometimes life imitates art. Why should interior decoration be any different? Carpaccio's magically peaceful painting that sends me into raptures. It has a lightness and quirkiness to it that is very Venitian, but an interest in interior detail and light along with the suspended time quality found in Flemish painting. This image is among my favorites stocked in my imaginary museum of ideal interiors.  The bed is so very graceful without its curtains; lightness and charm abound here, so that we end up with a very modern ornamental aesthetic. No wonder this scene inspired several interpretations by early 20 th century interior decorators. 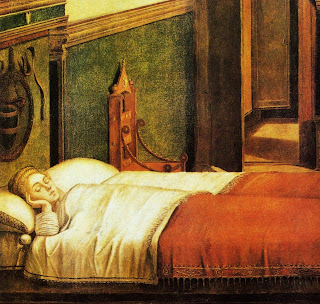 The child princess has placed her crown at the foot of her bed, but golden braids encircle her head as a substitute. One would never imagine that St Ursula, neatly tucked into her bed and pensive even in her sleep, is dreaming of her choice between marriage and martyrdom. The room's pure and peaceful atmosphere may be said to be a kind of portrait. Ruskin wrote, "Carpaccio has taken the pains to explain to us, as far as he can, the kind of life she leads, by completely painting her little bedroom in the light of dawn, so that you can see everything in it." His text in Fors Ciavigea goes on to describe the room in minute detail. 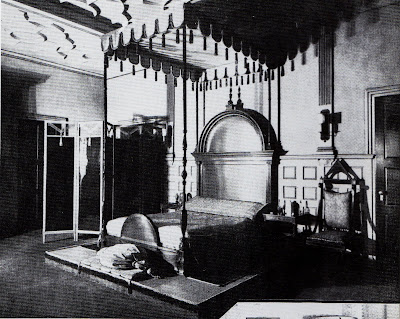 Ruskin's praise of the Carpaccio painting did not go unheard and several real life versions came to be.  Edwin Lutyens used certain elements found in the composition (see post by The Blue Remembered Hills), but the room that most interestingly reproduces the painting is by Geoffrey Scott. Scott was part of Bernard Berenson's circle in Florence, a Renaissance scholar known for his book, The Architecture of Humanism. He was also a great friend of Edith Wharton. The room was created for his friend William Haslam's Florence home in 1914, the bed of which is today found in the Victoria and Albert Museum. This illustration from 1917 Vogue shows yet another version created by Scott for the Vanderbilt home in which proportions were enlarged to suit the client's dwelling. Yes, it is more theatrical, but then maybe it too is the portrait of its owner.
see Wikipedia for Geoffrey Scott
Posted by gésbi at 5:01 PM