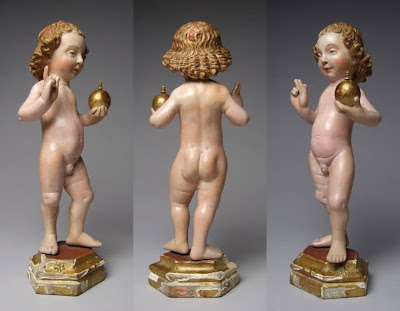 This endearing dimpled figure, smiling his welcome and simply holding a globe in his pudgy little hand as if he were offering a special ornament for the Christmas tree, was sculpted in Mechlin and polychromed in Brussels around 1500. Mechlin, Brussels and Antwerp were among the major centres of art in the former Southern Netherlands, and were particularly known for their production of finely carved wood statuettes, which flourished at the end of the Middle Ages.

The Infant Jesus statuettes were designed to be seen from all sides and were generally intended for the devotional practices of nuns, who could look after the statuettes as they would an actual child, with maternal care, dressing them, putting them to bed, talking to them and embracing them.


The style of this Infant Jesus is so typical that its Mechlin origin is instantly recognizable. It is one of the rare statuettes of its kind that still survives while several hundred Virgin Mary, Virgin with Child, and male and female saint statuettes produced by the Mechlin workshops still exist, only a dozen Infant Jesus statuettes sculpted around the year 1500 remain today.


The Louvre was the very first French museum to acquire this Infant Jesus statuette in September 2009. The museum will soon undertake the reastauration of this major work which exemplifies the devotional practices of the Middle Ages in Europe. (Donations are accepted on the museum site.)

WITH LOTS of LOVE and JOY