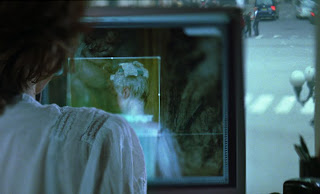 Ce que mes yeux ont vu/what my eyes have seen (2007) has been the best viewing surprise
I've had this holiday season. Laurent de Bartillat has imagined the suspense of a detective story concerning Watteau, one of the most mysterious painters of all times, that succeeds in being aesthetically pleasing and having a intriguing psychological edge. 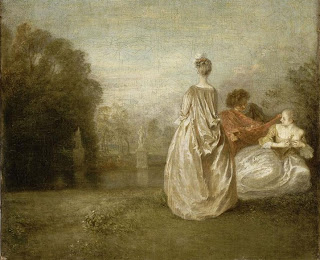 It's a story of fascinating research conducted by art history student (Sylvie Testud) under a stony, if esteemed professor (Jean-Pierre Marielle), which overflows into their lives.  Their wounds and obsessions  permit identification with the art works and give it life in a way that allows new discoveries. The student's interest in a street mime (James Thiérrée) and her theories on the depiction of a mysterious woman seen always from the back will help her to reveal something as yet completely unknown. 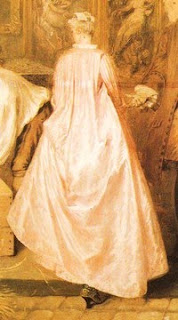 The film director, himself schooled in art history, explains how in examining paintings,
"one takes a detail and tries to understand not only why the artist has placed it in the picture, but also what story it tells about him. And the further the research goes, the more one is drawn into the inside of the  painting. As with a police inquiry, it is a matter of working with clues, traces, correspondances,
cross-checks. We try to make details speak exactly like an investigator who tries to make objects witness in the room of a victim." (allociné) 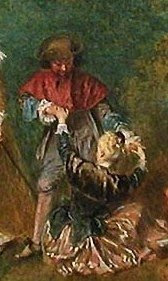 Born in Valenciennes in 1784, Watteau's work shows the influence of the great Flemish masters, particuliarly Rubens and the Venitians. Little is known of him and he deliberately kept several ateliers throughout Paris so he could better hide away to work. His own artistic particularities result in a strange quality given through vaporous renderings, sensual palettes and scenes peopled with enigmatic figures. Painter of fêtes galantes, those fashionable outdoor gatherings, Watteau is perhaps most famous for the enchantingly melancholic Le Pèlerinage à l’île de Cythère (detail shown above). Other subjects of predilection are Pierrots (clowns) and characters from the commedia dell’arte. 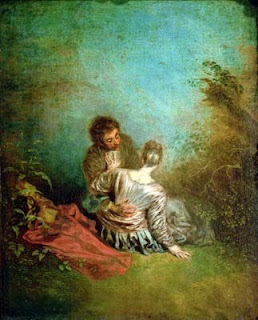 Watteau died of tuberculosis at the age of 37.  He was an innovator in a period of change between Louis XIV and Louis XV, the Regency. His works were later to influence the Impressionists with their light but palpable air and were greatly admired by poets, in particular by Baudelaire and Verlaine. 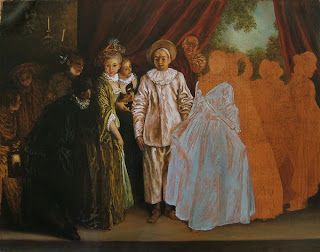 Original paintings were made for the film by copy artist, Valerio Fascinani.

Sorry, no subtitles here, but you can get a sense of the atmosphere: