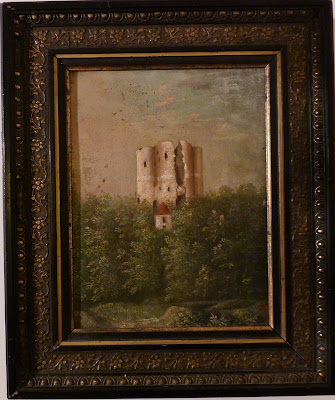 Why do we buy paintings? There are many reasons to like a painting. Of course, we might collect a particular artist we love and there are also those who use art as an investment, but I am more interested in our reaction face to face with a work of art. There is pure aesthetic response -the colors and shapes are pleasing to the eye. Maybe the style and tone seem to be just the thing for a particular room in the house. Sometimes a work of art reminds us of another work of art, so we feel we already understand it. Or we recognize what is depicted and it creates a bond with that place. Have you ever found a portrait that looked like someone you knew? In my childhood home were a pair of portraits, the elegant woman looked like my mother and the man with glaring eyes like my great (and grumpy) uncle. They became honorary ancestors. There are those who like to people their walls with portraits they find pleasant-looking, thinking they are easy to live with and make good company, while others are horrified at the idea of letting strangers into their home!

I'm usually very spontaneous about paintings and like many different styles for all sorts of reasons. I think the reflections and ... rationalisations come later! As an art history student I liked to look up artists in the Bénézit. In recent years, I've found that I love to research whatever I can about the artist or subject through the Internet. There is so much to be learned and to bounce off. 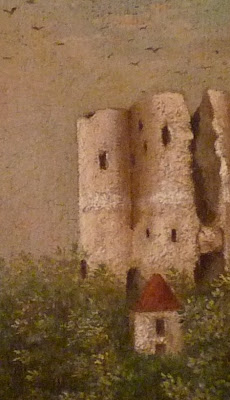 This broken-down fairytale tower isolated in a lush green forest appealed to me immediately. In style, it seems to be part of a detailed background landscape in a northern Renaissance painting, but it's a painting in its own right. It isn't a mysterious, majestic ruin such as those by Caspar David Friedrich or classical study by Hubert Robert, though the subject tickles our romantic imagination. I do know the effect would not be the same if the tower weren't
splitting apart. 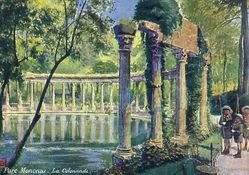 Taste for ruins runs back at least to the 18th century when real classical vestiges were contemplated as sculptural vanities. First coming from England and Germany, this spreading fashion called for newly constructed ruins to meet the demands for soul-searching promenades in the park. Some of these crumbling edifices can still be appreciated in Paris in the Parc Monceau or the Buttes-Chaumont. Was my painting a souvenir of this fashion? I know it was painted before 1893, but I have never yet made out the artist's signature. Since I know who it belonged to and where he lived, M. Léon Berlière, musicien-chef d'orchestre à Etampes, I was able to discover that the tower had really existed and that it still stands today. A visit was in order. 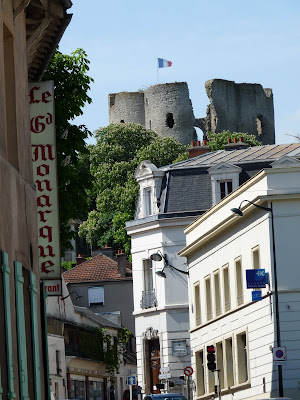 The tower is still a landmark in the town of Etampes, located about one hour away from Paris. 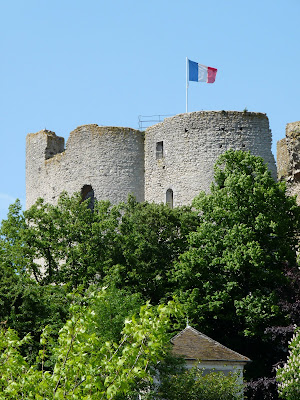 The spring greenery is higher around the tower these days than in my painting. The small building below the tower seems more modern as well. Was that the painter taking artistic liberties ? In any case, the painting is better with the more primitive looking structure.

The tower was not built to follow the whims of 18th or 19th century fashion but was once the keep of an 11th century fortified castle. 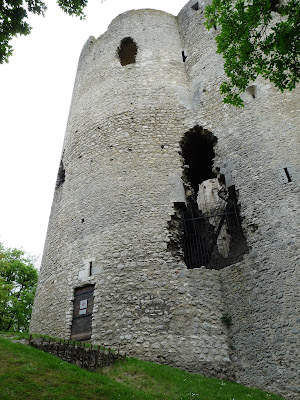 Its surroundings are now park grounds where families come for picnics. It hasn't crumbled down since my painting was done. In fact, it has been restored, but as a ruin. It is a reminder of the strengths and weaknesses of the past, the ambitions of men come before us to be read in each of its remaining stones. 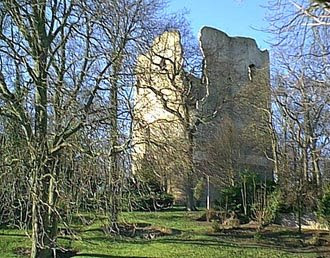 Here is a good view of the split tower unobscured by foliage.
photo Ville d'Etampes
"The effect of these compositions, good or bad, is to leave you in a state of sweet melancholy. We fix our gaze on the debris of a triumphal arch, a portal, a pyramid, a temple, a palace, and we come back to ourselves. We anticipate the ravages of time, and our imagination scatters to the ground even the edifices in which we live. Just then, solitude and silence rules around us. We alone remain of a whole generation that is no more; and that is the first line of the poetry of ruins."
L'effet de ces compositions, bonnes ou mauvaises, c'est de vous laisser dans une douce mélancolie. Nous attachons nos regards sur les débris d'un arc de triomphe, d'un portique, d'une pyramide, d'un temple, d'un palais, et nous revenons sur nous-mêmes. Nous anticipons sur les ravages du temps, et notre imagination disperse sur la terre les édifices mêmes que nous habitons. A l'instant, la solitude et le silence règnent autour de nous. Nous restons seuls de toute une génération qui n'est plus ; et voilà la première ligne de la poétique des ruines.
DIDEROT
Posted by gésbi at 3:41 PM

Les choses nous rendent regard pour regard. Elles nous paraissent indifférentes parce ce que nous les
regardons d'un regard indifférent. Mais pour un oeil clair, tout est miroir; pour un regard sincère et grave, tout est profondeur.
Objects return our gazes look for look. They seem indifferent to us because we look on them indifferently. But for the eye that sees clearly, everything is a mirror; for a sincere and mindful observer, everything is profound.
BACHELARD